No Lawsuit Against PZ Myers is Forthcoming 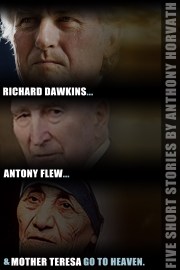 Long time followers of this blog know that a collection of short stories I published on Kindle last year at about this time caused quite a stir.  It began with PZ Myers ‘reviewing’ the stories, and ended with a lot of folks coming by my site to flame me and even threaten me.  (Don’t worry, everything has been archived, including IP addresses).  Myers even violated my copyright in the process.  You may see this post for more on that.

I have now updated the collection with a foreword and two new short stories.  Each of the two new stories is called “Anthony Horvath Goes to Heaven.”  These two stories also have introductions.  You’ll understand the similar titles after you get the series, but suffice it to say that they are written as a response to some criticisms about the fairness in contemplating the eternal fates of others, but not oneself.  (Although, it should go without saying that Christians are all together concerned about the eternal fates of others- and themselves.  Right?)

Since much of the series is now available on the Internet, both legally and illegally, I have now published the series on Smashwords, which does not allow for DRM protection of their ebooks.  This will also allow wider distribution of the stories in a variety of new formats.  They also allow me to provide coupons for discounts on the book.  Below you will see one such example.

I will discuss these stories, and the reaction to them, in a session at the 2012 Online Apologetics Conference.

Now that I have settled in my mind how to proceed on the Myers/Copyright Infringement matter, I am now ready to start responding to some of the responses to the stories, especially in those areas where it seemed as though ignorance about Christian doctrine was at play and a follow up on my part might actually serve some purpose.  I won’t be revisiting all of the responses, because there were literally thousands of them.

Finally, I have had several inquiries as to whether or not the series was available in book form.  You must bear in mind that the three original stories were not written with public consumption in mind.  I had written them separately, independently, over a couple of years.  When I saw them sitting around on my computer doing nothing I decided that a digital book wouldn’t be much trouble or expense.  (I did not at the time factor in the possible expense of legal fees!)  They were not polished or refined, and at any rate they were not collectively long enough for a printed edition.

With the addition of this new material, it is just barely long enough to be suitable for printing.  If you are still interested in a print edition, please let me know.  If there appears to be sufficient interest, I will pursue that option.  Sufficient interest = 50 or more people.

Ok, without further ado, here is the new purchase information for the series:

You may use this thread for posting feedback and comments about this collection and/or indicate interest in a print edition.