Solving the Islamicist Problem Once and For All, Part 4: Citizens of Two Kingdoms

Christmas and the Pri(n)ce of Peace

How Julian the Apostate Defeated the Church in America 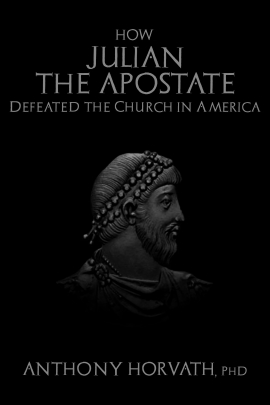 I have penned a lengthy essay which is now available on Kindle and other digital outlets called “How Julian the Apostate Defeated the Church in America.”  I consider it one of the more important things that I have written, especially in light of my experiences as a Christian apologist, and also as a pro-life advocate.  Surveys and polls continue to show that the American Church (especially the mainlines) is in decline, and that the ‘religious nones’ are on the increase.

In the course of my various activities, it has become clear to me that Church itself is facilitating this twofold trend.

All signs point to the trends becoming even more pronounced.  I am very skeptical, in fact, that Christians of this generation are ever going to come to grips with the real reasons for their loss of stature in this country.  In a sense, this essay is almost better served as a post-mortem, something to be looked at two generations hence, after it has finally and fully come to pass.

I have invoked Julian the Apostate before on this blog.   He intentionally sought to carry out the ‘good works’ that the Christians were doing, recognizing that the Christian proclamation of the Gospel was given significant credibility in the eyes of non-Christians because of the near miraculous nature of those ‘good works.’  What Julian the Apostate attempted to do as one hostile to Christianity, Christians themselves have wrought, in the name of Christianity.

Not that Christians were alone in bringing it all about.  In fact, that’s kind of the point.  There are plenty of non-Christians that are perfectly happy to take on whatever ‘good’ that the Christians could properly be credited for, and then strip that ‘good’ from its Source.   Separated from the ‘Source,’ many things are considered that many Christians find reprehensible… alas, its too late.  Should have thought about that before handing these matters over to the State to administer!  (I use the Jaffe Memo to illustrate, but it is not by any means the only example.)

In the course of my research for my dissertation, which was on the topic of Darwinism and Eugenics, I had the opportunity to read a tremendous amount of primary source material in the time period of, say, 1890 to 1930.   I frequently encountered people–Christians included–advocating that the time was right for a ‘Scientifically Managed Society’ (my phraseology, but see here) in order to fight all of our social ills.  On top of that, I frequently encountered musings about how best to make the Church a less potent force in society (and they often meant by this, the Catholic Church).  This was necessary, because the Church wouldn’t go along with the more extreme ‘Management’ proposals, such as wiping out the weak and/or forbidding them from reproducing.

Taking the ‘duties’ of the Church over and having them done by the government, where, of course, the religious content and basis would have to be gutted to be ‘fair’ to the non-Christians in society (separation of ‘church and state’, anyone?), was hinted at as one possible way forward.  Eugenics was often put forward as a candidate for a new state religion for a somewhat related reason, in that it was seen that once the scientifically disproved religions were dispensed with, there would still be a need to fulfill man’s ‘spiritual’ needs.  Google Haeckel’s monism to get started.

The effort to take over whatever the Church was doing and have it done by the State seemed to pick up dramatically after the second world war.  A case can be made that folks like Julian Huxley pursued it as an active program, but whether or not this was intentional or deliberate or not is really besides the point.   The question is “What was the actual effect?”

The American Church is experiencing the ‘actual effect’ right now, in pretty much exactly the fashion that Julian the Apostate, who certainly was intentional and deliberate, anticipated.

As a case in point, even though the essay is written to Christians in particular, I let a British atheist friend of mine preview the essay.  I guess I was interested to see if he might say, counter to my charge in the essay, “No, that’s not true!  Secularists have not forgotten the valuable contribution that Christians made in erecting our innumerable social services!”  A man can dream, right?

But when I asked him about it, he seemed to miss the point completely, and in missing it, made it.

I had said that I was not as familiar with how things went down in England as I am in the US, but that I would be willing to bet that even there, their national health service was brought about with the help and advocacy of Christians there.  He protested, “In fact, our universal health system was established by the Labour party” (ie, liberals, and mostly of the non-Christian sort, I would guess).

But I would wager that if we looked at the ones who helped advocate for that system in England, a great many of them were Christians, or self-identified as such, or at least considered their efforts and support as consistent with Christian values.  I couldn’t produce documentation for the British Christian support of their health system the way that I could for, say, American Christian support for social programs in the United States, but I would be willing to bet money that British Christians advocated for universal health care just as American Christians were among those who advocated or backed FDR’s ‘Social Security.’  For, in the 1920s and 1930s, at least from my readings, many in Britain still considered their country to be ‘Christian.’

And now look at it.

And look at where the United States is today, and where it is clearly going.

Perhaps there is a pattern?

Christian ‘charity’ is not by any means the only thing that the State has taken over that originally was motivated largely by Christian concerns.  Many Christians have already spent some time talking about these, probably most prominently education.  My essay addresses ‘charity’ in part because it was a subtext of much of the debates of the Progressive movement which I studied so much, but also because I think it is one of the most vivid examples of something that has become almost thoroughly politicized which, at least from a Scriptural point of view, was always represented as something that individuals or small groups of Christians were responsible for.

And, in case you haven’t been paying attention, the pressure is on to make sure that religion is kept totally separate from politics.  A bit like that quote by C.S. Lewis that (paraphrasing), ‘religion is what you do when you are alone… and we will see that you are never alone….’  The same thing is happening here, except now it is “you can have your religion as long as you keep it out of politics… and we will make everything political.”

In this kind of context, it is not hard to predict what the outcome will be.  The sad thing is that Christians, past and present, have been complicit in creating this ‘context’ in the first place.

May this essay be a starting point for Christians who care about the Scriptures, as written, to begin following through on Paul’s commandment in 1 Thessalonians 5:21… “Test everything.”

You may purchase this ebook on the Kindle, here.

P.S., the short answer to, “Many people, think Christians only care about abortion and gay marriage. Since that is not true, how did this impression come about?” is, “Christians have given every other issue over to the state to manage.  These were… until recently… the only two issues left.”  Without even these, the Church in America is on the verge of complete irrelevance.