A Case in Point of Alinsky-Style Politics and Governing: Gruber, Transparency, Taxes, and the Mandate

Jonathan Gruber: The Other White Meat

So everyone is piling on Jonathan Gruber right now.  A third video has now been released where Gruber basically says what conservatives have been saying for a LONG time:  corporations don’t pay taxes; the corporations pass the tax to the consumer.  (I made this point at length, here.) In this way, you can SAY that you’ve stuck it to the big, bad, corporation and that you’ve stood up for the little guy, but, well, actually, you stuck it to the little guy.   (You actually need to look at more of the context than the CNN article alludes to… as if insulting Americans is the sole story here!)

The irony here is that he is talking about taxing so-called ‘Cadillac plans’ which liberal labor unions fought so hard for.

Anyway, we’ve got to remember that Gruber is just one of many, and they all lie.

Anyone who has been paying attention to Obamacare from the beginning knew they were always lying.  About everything really.  If anyone had the audacity to point out that the numbers simply didn’t add up they were subjected to catcalls like, “Experts say such and such… are you an expert?  That’s what I thought… idiot.”  All Gruber has given us is explicit admission, from one such expert, that the skeptics had a point.  However, we didn’t need an expert to validate our assertion that 2+2=4, or, Obamacare is built so that “healthy people pay in and sick people get money.”  And so on.

I’ve had to chuckle listening to some of the Republicans bemoaning the deception by Gruber, as if there was any doubt at any time that deception was part and parcel of Obamacare and the nefarious ways it was foisted upon the United States.

I’m afraid that this is all going to get hung on Gruber’s neck, and the rest of the people who were complicit will escape judgement.  Gruber deserves everything he’s getting, but his share in the deception must be small in comparison to people like Reid, Pelosi, and of course Obama himself.  We’ve been ‘grubered,’ alright, but by far bigger fish than Jonathan Gruber.

I’m sure Bart Stupak might have something to say about such things, but someone is going to have to track him down, first.  He was last seen walking around in a daze, his clothes in tatters, muttering, “But Obama gave me his ironclad word… his word...”

Actually, as I sit here thinking about those Republicans just now realizing that we were intentionally misled (not that some of us actually were misled) it isn’t really funny.  I personally doubt that they really are that surprised, which raises the obvious question about why they didn’t do more to address it, which in turn raises the obvious question about whether or not, even now, they’re going to do anything about, well, anything.

I, for one, don’t expect them to.  And that is a reason for sadness. (Unless you are a liberal progressive, of course.)

Something tells me that Obamacare is the ‘Gruber’ that will be dying hard, rather than the hero, the American public.

In tribute to the chewing out that Gruber is enduring, I put this together.  Share as you wish. 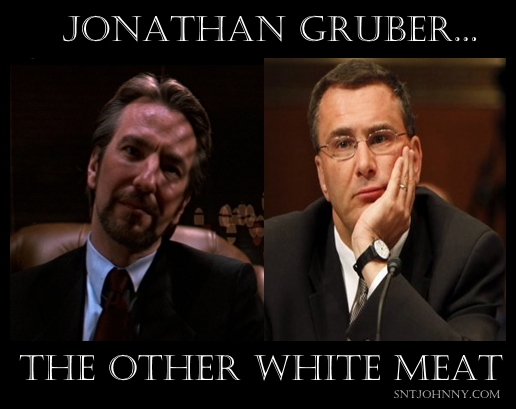