Why We Shouldn’t Try to Stop Donald Trump

I haven’t posted much on the presidential campaign, or even followed it as closely as I’ve followed others, because I’ve been busy.  And if the reader says, “But the stakes are too important to not follow it extremely closely!” the reader will be making my point.  One of the main ideas behind the republican system is that it allows the average person to have life and liberty, while pursuing happiness.  We elect people who reflect our values who have the job of following things closely.

One of the other main ideas behind our republican system is a robust system of checks and balances.  So, theoretically, if any of the people elected get out of hand, there should be other people perfectly placed to put a stop to it:  no insurrection by the citizens necessary. 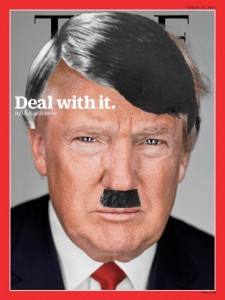 I am a ‘big picture’ kind of guy.  I like fundamentals.  I inspect foundations.  I don’t live in the present moment, carried along by the latest mass-media inspired ‘hate du jour‘ which are presented as having no history, no source, and no roots.   In fact, I think roots are pretty important.  We debate the ‘fruits’ of things, but pay no attention to the branches.  If we did, we’d follow the problem all the way back to the trunk, and from there to the roots, and understand that unless the whole thing is pulled up, your disputations and rage are ultimately for nothing.  You may have delayed the inevitable, but the tree will grow back again, in another generation, and threaten to bear fruit yet again.

It is with great interest, then, that I have watched the controversy regarding Donald Trump unfold in Republican circles, but not as a manifestation of 2016 politics, as though 2016 was the first year humans have ever existed, or the first year the United States has elected a president.  My Facebook feed is thoroughly populated with people who despise and detest Donald Trump.  I mean, they really hate him.  I’m talking about conservatives, here.

In the main, they pull for Cruz.  In the main, they are Christians.  And, for the record, and to immunize myself from the vitriol of the aforementioned Facebook friends, I myself support Cruz.  (And I am a Christian).  But, I have to wonder why it is that we’re so worried about Trump.  I wonder if, in worrying about Trump, we are accepting a premise that is far more sinister than Trump.

Let’s consider some of the concerns that have been raised about Trump.

Now, this last is of some interest, and feeds into the point that I’m making in this post.

Aren’t you a little interested in exactly how a President can fund… anything?

Like, only 3 months ago.  They may have voted for the legislation that came later, that would have defunded Planned Parenthood but was vetoed by Obama… but then, they knew that the latter would be vetoed but the former would not.  Net effect:  Planned Parenthood is funded for another year.

When raising the various concerns that have been raised, are we then accepting the premise that a president actually can…

In the first four cases, if the point isn’t obvious by now, the president only has the power that is given to him BY CONGRESS.

And it is CONGRESS that has so pissed people off that they are supporting Trump in the first place.  In three consecutive elections, large conservative majorities were elected throughout the land–state, local and Federal.  Except for the re-election of Obama in 2012, there is a near-complete overhaul of the country, in the ‘conservative’ image.  And for all these efforts…

Very little to show for it.   The CONGRESS has had the ability for six years to put a stop to unilateral executive action, whether through legislation or by exercising the power of the purse, and they’ve pretty much just let Obama get away with everything he wanted.  No one wants to have a showdown.  No one wants to put their money where their mouth is… except folks like Cruz, who is hated and despised by people in his own party… for having a showdown and putting his money where his mouth is.

I mentioned the last item, the confiscation of guns, to highlight another aspect of the question.

Let’s assume that Trump really moved to unilaterally confiscate guns.  Do we imagine in this scenario that Trump begins going door to door, compelling homeowners to turn over their ‘automatic’ weapons?  If they resist, Trump straps on his SWAT gear and goes Rambo on them?

No.  To enforce such a thing he would need the compliance and active support of municipalities and law enforcement.

Thus, by issuing our concern about a fascist Donald Trump as president, are we not doing two things at once?

1., Are we accepting the premise that our presidents get to be fascist if they want?   Is the only thing that separates whether or not we live in a tyranny or the ‘land of the free’ the whims of a particular president?  Should it really be possible that a president can make or break a country, all by himself?  Should a country’s economy and prosperity hinge on the power and authority of a single man?  Or even 535 men and women (House and Senate), plus 9 for SCOTUS, and another 1 for the president for a total of 545 men and women reigning supreme over a population of 300,000,000?

My friends, if our life, liberty, and well-being, hinges on the whims and will of less than a thousand people, it is stupid to be arguing over the respective characters of those people and what they will or will not do.  The problem is much more foundational:  Even 1,000 elected Hitlers should be relatively harmless, if the checks and balances established by the Constitution were in place.

2., Are we voicing our concern that the mass of America’s people will simply go along with something just because the president, Congress, or SCOTUS, declares it?  To confiscate America’s guns would require America’s army to carry out the collection.  Are we saying that, deep down, we think that our soldiers would follow unlawful orders?  Are we saying that our state governments will comply with plainly unconstitutional rulings by SCOTUS?  That our governors and state elected officials will not stand up to Federal overreach?

Well, if you think the concerns expressed in #2 are legit, I wouldn’t argue with you.  I think those concerns are valid.  But they are the fruit, not the root.

To get to the ‘root’ we have to go back to a time before most of us were born, at least as far back as Woodrow Wilson and Theodore Roosevelt, if not further than that.  And, frankly, Republicans have been complicit.

If we live in a time where a president of the United States could actually be a tyrant… and there is ample evidence already that we have long reached this point… then our problem is not any particular candidate for president.  The very foundations of the republic have been eroded.