My Interactions on Social Media Explained

The Right Tool for the Job of Securing Liberty

A ‘Solution’ to Mass Shootings at Schools

Listen.  I will tell you a secret.  It isn’t the gun.  Indeed, if Nicholas Cruz had wanted to kill even more people, he could have waited until after school and drove his vehicle 60 mph into the kids lined up as they were getting onto their buses.

In the Nice, France, attack, 86 people were killed and 458 others were injured–not by a gun, but by a truck driving down the street.  This is more fatalities than the Vegas shooting.  Not too long ago, 8 were killed in NYC due to a truck attack.   There have not been calls to ban vehicles.  Because that would be stupid.  (You might be surprised at how many such incidents like this there are.)

In Japan, 19 were killed and 26 were wounded in a stabbing attack in 2016.  This surpasses what Cruz ‘accomplished.’

In this murder spree, these two gents killed 21 people–with a hammer.

Are you starting to get the picture?

And lest we forget, France has very strict gun control laws, but that didn’t stop thugs from getting them and wiping out 12 in the offices of Charlie Hebdo.

Wouldn’t it be nice if we could focus our attention only on the objects, and solve our problems.  Alas, the problem isn’t objects, it is subjects.  If people decide they want to kill there is little to stop them–except other people.

It is not my purpose to get into why exactly we see schools targeted by shooters.  The basic answer is one that no one wants to contemplate–SIN.  But call it whatever you want–or don’t call it anything.  All you have to do is come to grips with the reality that people are going to continue to murder other people en masse using whatever tool they decide to use. Unless you want to enclose every person on the globe in their own private padded rooms, or ban knives, trucks, hammers, rocks, machetes, ropes, …. , this is an unalterable state of human affairs.

Now, when the grown ups began to appreciate the fact that people were using trucks as weapons, they did not say a peep about banning trucks.  Instead, they worked within the reality that they found themselves in.  They analyzed their situation, erected barriers, trained themselves to spot potential assailants, etc.

Yea, it SUCKS that it became necessary to think in those terms, but THAT IS THE REAL WORLD.

I am convinced that one of the reasons why no ‘solution’ to the mass shooting problem has emerged is because the ‘solution’ means acknowledging not only that people are not intrinsically good, but worse… they are intrinsically bad.  The implications of that realization are far more uncomfortable than the feel good alternative of focusing on the object used in the slayings; well, only if that object is a gun, right?  The point is not trivial.

Now, before I go further and help you all out with the ‘solution’ to this mess, let me submit to you that there have been guns widely dispersed in American society for many decades, but school shootings are only a more recent development, inaugurated more or less with Columbine.  This should tell a tale, except the tale it tells is one that no one wants to hear.   What it means is that there is something that has changed IN THE CULTURE.

If there have been semi-autos back into the 30s and 40s, and bad men even then, but mass school shootings didn’t begin in earnest until the late 1990s, it means a CHANGE has occurred that has NOTHING TO DO with the existence of bad men or the availability of guns.

I’ll have to leave the reader to ponder some ideas on why that is for now.  Yes, I have some distinct ideas of my own, and agree that these dynamics ought to be addressed, but right now my purpose is to save lives, and what I wish to dispel is this fanciful, veritable childish line of reasoning, which supposes that if suddenly every gun was removed from the planet, mass murders would stop.

NO.  They WOULD NOT STOP.  The murderers would merely SWITCH tactics.  Whatever dynamics are driving people to shoot up schools are still going to be present if there are no guns to shoot.

If you want to save lives, you’re just going to have to come to grips with this reality.

To put the point somewhat differently, when you put obstructions up around a soft target so that a truck can no longer mow people down, then you can FULLY EXPECT that perpetrators are going to adapt.  YES.  Good Lord, people.  Can’t you get it through your thick head?  They do one thing, we do another, they react, we react, they react again, THIS IS THE REAL FRIGGIN WORLD.

If you want to save lives–really–then you need to get your head in the world we’re actually in, rather than the world you wished you live in.  Two seconds on Google news will dash any illusions you have about the nature of the world… but you’re a stubborn fellah, aren’t ya?

(Oh yea, and just as a quick aside, if you broaden your research a little further, you will discover that there are no mass murderers that rival the murdering that various States have inflicted on their unarmed subjects.)

So, here is the solution:  abandon the fairy tale about schools being safe environments just by virtue of having locked doors.  (such silliness.  The Sandy Hook shooter just shot his way through the door.  I mean, duh.  What did you expect?)   Abandon the goal of FEELING safe.  Do what is necessary to BE safe within the current environment.

And that means 2-6 sufficiently armed men on the school premises, authorized to intervene ASAP.

Period, end of story.  No brainer.

If you have your undies in a bundle about having private parties stationed on the school campus armed to the teeth, you could just suck it up and bite the bullet (no pun intended) and factor in the hiring of armed police officers as part of the school budget.  I know with budgets being tight as it is, that’s a hard thing to do, but if you really think you’re going to eradicate every gun in America any time soon you desperately need a reality check.

There is potentially a more cost effective way to do it that might make for a good compromise, and that is to ask any of the hundreds of thousands of veterans that are in our country and ask them to do it.  I will bet you a good chunk of money that almost every community in the country could come up with a sizable security force of trained former soldiers who would gladly be willing to step up to the task, and charge next to nothing for the privilege.  (They would consider it an honor.)

You do this, and mass school murders–not just shootings–will come to a screeching halt.  But if you do it, you gotta really do it.  No half-measures.  No skimpy security details.  For something like this, you have got to do the job right.

Does it strike you as tragic that one would need to have armed guards in a place of learning?  Oh well!  Have you never given any thought as to how we can generally live our lives in peace from threats, foreign and domestic?  That’s not an accident, my friend.  While you might like to nurse your utopian ego and pretend that it all works because at lease we civilized folk are singing Kum Buh Ya, but in point of fact, we only have our relative safety because, as Richard Grenier said, “People sleep peacefully in their beds at night only because rough men stand ready to do violence on their behalf.” 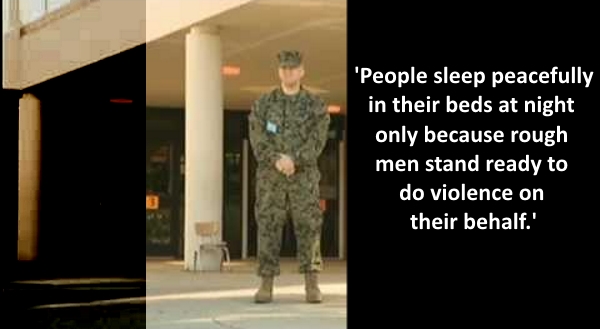 If you want to stop the killing, you have to suck it up and realize that people have decided that schools are great places to find defenseless people to kill, so if you want to make the change, you need to insert into the equation people who are NOT defenseless.

Do you know what is tragic?  I’ll tell you what is tragic:  people who understand that we rely on ‘rough men’ to secure our peace and freedoms against tyrants and various foes but somehow think its a PERFECTLY BRIGHT IDEA to leave our children defended only by … a hippie delusion that OF COURSE no one would target places of higher learning!  THAT is tragic.

It’s time to come to grips that our schools have practically been designed as actual kill boxes which are known to be absent of ‘rough men’ defending them–with outcomes almost so obvious its almost embarrassing that anyone is shocked, SHOCKED, when sees them as the kill boxes they are.  It’s time to give the ‘rough men’ their proper place, and give up this asinine self-delusion that all we have to do to protect our children is to get rid of the guns.

You either hire a bunch more police officers, ‘enlist’ our vets for the cause, or allow private citizens to step into the breach, or a combination of all three.

This is the solution.  There is no other.