Hey! People! Even Blagojevich is Innocent Until Proven Guilty!

Should Christian Parents Encourage Children to Believe in Santa Claus?

Orthodox Christianity holds that God is both a transcendent entity and immanent.  If you understand what Christians propose to be true about God, you understand why both attributes follow necessarily.  All religions boil down to some expression of one of these two attributes, usually to the exclusion of one to the other.   Deism, for example, emphasizes transcendence and despises immanence.  Various forms of paganism emphasize immanence, that is they identify ‘God’ with the universe and reject that there is a God ‘outside’ it.  Even atheism takes a position here:  naturalism is just another variation on immanence and ‘God’ is just another label for the ‘universe.’

Christianity insists that God is both transcendent and immanent.

At any rate, there are some implications of this and I think it would be helpful to understand some arguments regarding Christian theism.   I can begin with by trotting out the old ‘Can God create a rock that he cannot lift or move?’ line.  The contention is that if God is all powerful he should be able to do this but in doing so he would simultaneously undermine his own omnipotence.  Most of the time this is answered by pointing out that some statements are just nonsense and God’s omni-characteristics do not require him to be able to achieve the nonsensical.  To understand how this is nonsensical we might take on the next line in this attack, “Can God make a round square?”  We see in this case that what is involved is simply definitional.  If round is properly and consistently defined and asked to apply to a square, also properly and consistently defined, then the request is nonsensical.  Something doesn’t become reasonable just because you insert ‘Can God’ in front of it.

Most people accept this explanation and I’ve found that even nonbelievers come around to accepting it.  (Not all of them do, which is why 17 year olds with Google can still find the question to ask it) 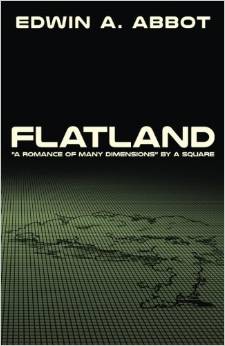 There is another way of looking at it, too.  Here let me submit the story about Flatland to help illustrate the situation.

In Flatland, the characters exist in a two dimensional world and have their geometry- and logic- all worked out.  Until, that is, a sphere breaks into their world.  Now, a sphere is a three dimensional object, so naturally the 2D entities have great difficulty perceiving what they are seeing.  A sphere, breaking through a plane, appears first as a single point and then a varying sized circle depending on how far the sphere comes in.   Are the triangles and squares face to face with a logical contradiction?  Not at all.  Rather, the logical rules that apply to the 3D world incorporate and transcend the logical rules of the 2D world.

Given the truth of Christian theism, I propose that we are in precisely the same sort of situation, with a few important differences–ie, God is not merely an entity occupying a higher degree of existence–he is that AND he essentially permeates all degrees of existence as it is.   This poses interesting epistemological problems if God wants to reveal himself and make himself known to the occupants of our ‘degree of existence.’  But I’m not here talking about that.

The point here is that if this is true, a number of the difficult to comprehend ‘contradictions’ in Christian theism are viewed as paradoxes that (plausibly might) entirely ‘make sense’ from the point of view of the super-natural perspective.  How can Jesus be both God and Man without diminishing either?  It can be a mindbender–especially if you insist in viewing it only in ‘2D’ terms (eg, in only ‘naturalistic’ terms).

It so happens we can use an analogy to help us understand it.  If God is 3D, and we are 2D, then our own creations are 1D.  What creations do I mean?  Those which we are simultaneously transcendent and immanent to–that is, the worlds we create within our minds and sustain by our powerful words.  Can we create a story in our mind and then a rock within that story within our mind that we cannot lift?  No.  We see precisely how that is nonsensical after we understand the nature of relationship between the creator/author and creation/character.

Likewise, we can, if we want, very easily make ourselves a character within that creation.  In doing so, we can perceive as we are doing it that we do not become any less than we were before, yet that character–You–is really both You and Character.  This is using sub-logic to understand super-logic.  If what I have said is the case regarding the stories we make inside our heads and threatens no logical incoherency or contradiction then we see that the same will be the case when contemplating our relationship to the Christian God.

I gave the example of the incarnation as an illustration of this but in my mind the real example is free will.  Naturally, we cannot create characters with real free will, but just as cube ‘loses’ something when rendered as a square, we too impart lesser attributes to our own creations.  Something is always ‘lost in translation.’

However, God can create ‘characters’ (us) who have real free will.  He can be both utterly sovereign AND give us real autonomy able to make real choices.

Then, there is the conundrum of the historic doctrine of the Trinity.  This doctrine, like ‘free will,’ seem logically ridiculous from our frame of reference.  Indeed, I will perhaps admit that they are logically ridiculous–from our frame of reference.  But I don’t see why I must confine myself to explaining everything from my own frame of reference.  Indeed, one might be able to say that the baffling nature of the doctrine of the Trinity is precisely what one should expect when a creature that is ‘more real’ tries to explain to the ‘less real’ creatures just what sort of creature He really is, just as the square will find it impossible to conceptualize the real nature of the cube.  Moreover, if God’s description of Himself made perfect sense within our own frame of reference, that would actually be a warning sign that He is not who, or what, He says He is.

I wish to clarify that I am not equating imperfect sense with no sense.  If I am right in my suppositions, doctrines such as the doctrine of the Trinity will still be rational even from our own frame of reference, just hard to conceive and conceptualize.  It is not that the doctrine is irrational, but that what it refers to can only be fully and perfectly elucidated using superlogic.

Of course, offering this paradigm as a way of explaining hard concepts doesn’t necessarily mean that a ‘higher’ paradigm actually exists.  What it does do, however, is remove the fact that they are hard concepts from the table as ‘objections’ to what as being proposed; given what is being proposed, they are supposed to be ‘hard.’  In my opinion, there are enough clues as to how these questions might be answered if subjected to this paradigm–and only Christianity provides not just a system for suspecting there might be a superlogic at all, but evidence that the ‘system’ is rooted in real human history at all.

In the same way no one knows the thoughts of God except the Spirit of God.  We have not received the spirit of the world but the Spirit who is from God, that we may understand what God has freely given us.  This is what we speak, not in words taught us by human wisdom but in words taught by the Spirit, expressing spiritual truths in spiritual words.  The man without the Spirit does not accept the things that come from the Spirit of God, for they are foolishness to him, and he cannot understand them, because they are spiritually discerned.  The spiritual man makes judgements about all things, but he himself is not subject to any man’s judgment:

For who has known the mind of the Lord that he may instruct him?