The real reason there is an ammunition shortage in America?

A Theology of Taxation? Horvath column published at Worldnetdaily.com

When the Children are in Charge All Hell Breaks Loose

While this has been going on for years, the recent spate of over-the-top reactions to ‘guns’ in the schools is beginning to illustrate the consequences of ‘political correctness’ that people have also been warning about for years.  In a word, we are seeing the emergence of a soft tyranny, a stripping away of liberties, a perverted loss of any sense of proportion and common sense, and a humorous and absurd–but dangerous–disappearance of courage among grown adults.

In short, many areas of our country are presently run by children:  or people with infantile minds, at least.

Check out these stories:

A kindergartner who brought a cowboy-style cap gun onto his Calvert County school bus was suspended for 10 days after showing a friend the orange-tipped toy, which he had tucked inside his backpack on his way to school, according to his family and a lawyer.

The child was questioned for more than two hours before his mother was called, she said, adding that he uncharacteristically wet his pants during the episode.

The mother says that she “had no problem that he had a consequence to his behavior” but questioned the severity.  His ‘behavior’?  It is a five year old boy.  He did nothing wrong.  And where is the father in this?  If my child was driven to ‘uncharacteristically wet his pants’ there would have been hell to pay, I kid you not. 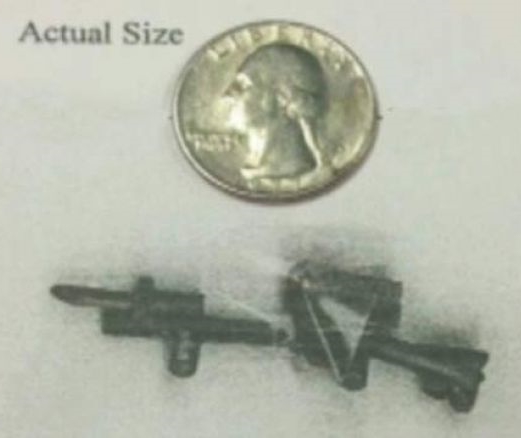 A 6-year-old boy in Massachusetts was accused of traumatizing his classmates after bringing a Lego-sized gun onto his school bus. The plastic toy was just slightly larger than a quarter.

The boy was given after-school detention and told to write an apology letter to the bus driver after a fellow student supposedly shouted to the driver about the gun, causing the other students to panic.

You see there the size of the ‘gun’ that caused the other students to panic.

So, we have become a society where the mere presence of a tiny piece of plastic the size of a quarter can drive children into a panic;  I suppose some of them wet their pants, too.  In this case, after originally disciplining the boy, they decided that maybe it was not warranted (because the kids did not panic, because kids are not idiots).  The instinct was to punish.

An 8-year-old Maryland boy who was suspended from school for nibbling a pastry snack into the shape of a gun has been given a junior membership in the National Rifle Association. […]

“I was embarrassed that my county would do that to him,” said Nicholaus Kipke, leader of the Republican minority in the lower house of the Maryland legislature. He presented the gift to the second-grader Wednesday night.

The ‘pastry’ was a pop-tart.  I believe it less likely that a pop-tart would be seen as a threat than a tiny piece of plastic.  But then, in these cases, as in nearly all such cases, no one thinks there is actually a threat.  And this is the important part.  This is the part you have to pay attention to.

These teachers, administrators, bus drivers, etc, etc, etc, do not typically perceive a threat.  Thus the ‘zero tolerance’ concept cannot be truthfully understood as having anything to do with making anyone safer.  Obviously, if a child did want to hurt someone, he is not going to be dissuaded, just as law-breakers don’t tend to be dissuaded by laws:  by definition.  The bringing of an actual weapon by a child with typical childlike innocence is obviously a very serious matter and ought to be dealt with urgently, but even that is not encompassed by the ‘zero tolerance’ philosophy, as the three stories above illustrate.

So what does the ‘zero tolerance’ philosophy really speak to?  Quite clearly, the message being delivered to children is that violence is absolutely and always wrong, immoral, and unjust.   “Don’t you know that guns are bad?”  Says the people who want other men with guns to come save them when bad men are upon them.

On first appearances, condemning violence makes a world of sense.  And then we look at the world.  It becomes evident in short order that sometimes violence is an absolute necessity, required in order to keep our freedoms and liberties and evil men at bay.  The infantile mind stops at ‘violence is baaaaaaaaad.’  The mature mind, having seen the real world and attempted to think through life’s many complications, understands that a much more nuanced approach is needed.  The adult mind knows that the important life lesson is not ‘violence is bad!’ but rather ‘Here are the times when violence is justified;  here are the times it is not justified.’

We should be teaching young people the principles appropriate to solving complex real world difficulties, including when the proper response is to use violence.  But of course, for this, you actually need to believe there are principles, and that there is a right and a wrong.  Our ‘adults’ are too afraid to even say that there are principles and ‘right and wrong’ lest they get sued.  The reason why they throw themselves so heavily towards the ‘violence is always bad’ notion is because they perceive it is the only non-disputable area of morality left in society.  They figure that everyone thinks that school shootings are so bad that no one could possibly object to policies ostensibly oriented towards stopping them, so they throw themselves into the project with gusto.

In the minds of these infants, handing out suspensions and detentions is a positive contribution towards the problem of school violence;  they are grappling with the issue head on, you see.

What happens when a society is so castrated that it has no concept on when it is appropriate to use violence?  We see it every day.  We see it in the gun control debate, where people actually believe that criminals are going to go along with gun restrictions.  We see it in our inability to stand up to the wave of illegal immigrants–many of whom inflict violence on our citizens–because we think that if they like us (as they surely must, if they are coming to our country) all problems will go away.  We see it in our inability to recognize in Islam an existential threat;  Islamic doctrine calls for the subjugation of the world and the death of infidels… but they can’t really believe that, right? If only we could get them to like us!  If only we’d stop ‘creating terrorists’!

An inability to process when it is appropriate to use violence is only one more illustration of a society being tossed about on the waves, anchored to nothing, no moorings in sight.  Other examples include our inability to tell teenagers “It is wrong for you to have sex.  Don’t do it.”  Unwilling to take the moral position that this behavior is wrong and unacceptable, we come along with ‘solutions’ to compensate for the harm they inflict on themselves because the adults refused to be adults, like NYC telling girls where to find abortion clinics or LA giving students ‘tools’ for communicating their STD status.  Oh yea, that’s real mature.  Real benevolent of ya.

But condemning the behavior that leads to the consideration of the abortion (‘punished by a baby‘) and having to deal with incurable sexually transmitted diseases?  Can’t do that.  Nope, that would be intolerant.  But we do stand ready to try to fix your life, now that its all busted up because of our own insipid cowardice!

And on and on it goes.

I addressed this infantile hypocrisy three years ago in this post, “Violence is never the answer… except when it is.”  It has a link to another over-reaction by school administrators which speaks to my point that diminishing actual threats is not the real target of the ‘zero policy’ philosophy, so in parting, I’ll leave you with that to chew on.  In the meantime, is it too much to ask… could you please grow up?  And quick, please.  You’re going to get us all killed.

The second-grader’s cap, made for a school project honoring the military, featured a small American flag and several plastic GI Joe’s. Morales’ teachers, though, claimed that the hat promoted the use of weapons in school zones.

And does anyone else notice that these are all boys?  Methinks there is something to that angle, too.  But that is another post.