Should States Decide Which Lives are Worth More than Others? A response to Jaime King’s Article In Nature Magazine

On the usefulness of Rocks

UPDATE: I have determined that this image DOES NOT go with this event, so I think it unlikely that the event itself did not happen. I await further clarifications. In the meantime, the post remains the same as it was for posterity’s sake.  Details. 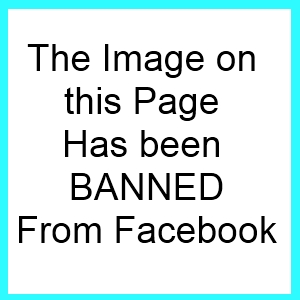 What happened in Sandy Hook was a horror upon horror, but there are many horrors in the world–so many that there is no way we can keep track of all of them.  So many that if we knew even a handful more than we know already, we would be overwhelmed.  But how is it that we know of the ones we do know about?  I think this question is important.

Some horrors are better made for television broadcast.  Some horrors fit prevailing narratives better than others.  Some horrors feed into private agendas better than other.  To what degree this might be the case in any particular choice by the media to highlight something will be forever cloaked to the majority of us.  Probably only 1 person out of 10,000 knows by name 5 TV or radio producers or story editors.

Of course, while these people are thinking about what motivates them (personal agendas and financial reward being high on the list, of course) they are also thinking about what motivates us.  They know that we prefer the clean, tidy narrative with a clear enemy that is safe to to target.  The NRA is safe to target.  Peaceful, law-abiding gun owners are safe to target (eg and eg).  White male Christians are safe to target, because despite what everyone says or implies, deep down they know that they are least likely to retaliate.

The intrinsic problem with this arrangement is that it is entirely possible that we will remain ignorant of real threats in our communities and in the world.   There are atrocities that don’t fit the narrative or are not easily televised that may be committed by people who will retaliate that do not surface for our attention.  Thank God for the Internet… but then, that takes a little effort, while getting spoon fed from the media is, well, getting spoon fed.

So below I give you an atrocity that I was just made aware of through one of sources of information.  500 Christians (because as it turns out, Christians of all makes and models are safe to target, not just the white male ones) were burned alive by Muslims in a church in Nigeria.  Here is a pic to feast your eyes on: 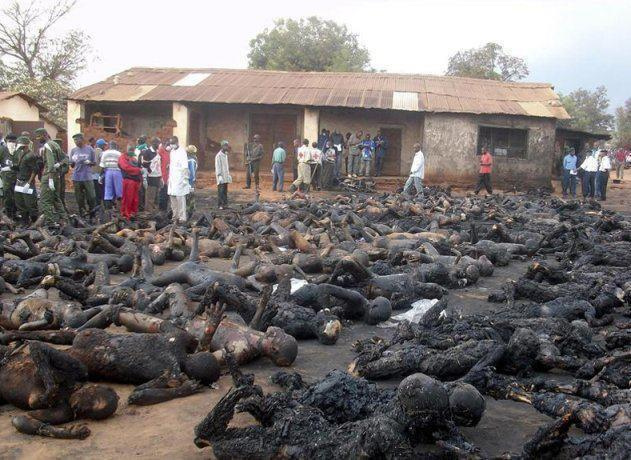 Note, my understanding is that Facebook has banned this from its site, so be careful in posting it. Please let me know if you post it and how it fares.

I believe we might be able to find 20 children in there, somewhere.

Nothing about this story fits into the formulas that would put it into the major media news cycles and of course this kind of picture would be printed or displayed.

In my estimation, there is also the problem of the culprits:  they were Muslims.  And if you call attention to the violent nature of Islam, or speak negatively about it at all, really, it is well known that you risk being stabbed on the street, beheaded, or otherwise targeted for destruction.  So, this is a story that one will likely want to avoid… a bit like how the tragedy unfolding in Egypt has largely been forgotten by the media, now that Egypt’s dictator has been toppled and replaced by Islamic militants.

Also of note, these people were all burned alive– not gunned down by a white male psychopath.  It would be most difficult to outlaw or regulate fire, and an outright ban is out of the question, so there isn’t even much hope that such a story would resonate with the personal agendas of any or our media elites.  So, if not for the blogosphere, you would not know about this, or many, many other horrors, perpetuated in many cases by people who represent real threats.

Caveat:  one theoretical benefit of having the mass media cover something is that they can validate and document particular claims and such.  Precisely because this incident hasn’t aroused the interest of anyone, it is difficult for me to be absolutely certain of the details.  I trust  my source, and include his comments below, and the link to a site in another language that seems to be talking about it.  God willing, more information will come to light on it.  If clarifications become necessary, I will make them.

I hope this post might help fuel a new narrative that aims to protect the people who are really vulnerable to attack from the people who are actually most likely to carry them out. At the very least, I would hope that it would serve as a warning to us not to be played for dupes, drinking up the talking points of whatever our mass media chooses to distribute today.

Note from my source:

How can America lift her head with pride knowing that our tax money and our military are supporting the ideology that burned the Christians whose charred remains are shown below?
The nation that wept over the horrors of Hitler’s gas chambers is turning a blind eye to the savage murders of people who truly share our values and our faith.

BTW, I was able to verify this story by going to the Spanish language site where the original text appears (see below this commentary). Nigerian Christians have had their churches burned by the local Muslims for many years so this is nothing new. It just happens to be perhaps the first time a photo of the charred remains has been sent to the public.

Here is the link he provides:  http://www.religionenlibertad.com/articulo.asp?idarticulo=25283

This appears to be a translation of that page: