A review of my book, “Fidelis” by Jean Heimann at Catholic Fire

With the upcoming release of Antony Flew’s book documenting his abandonment of atheism and explanation of where he currently stands, There Is a God: How the World’s Most Notorious Atheist Changed His Mind

, I thought it would be fun to trot out some of my own material responding to Antony Flew’s arguments when he was yet in the atheistic camp. Obviously, I don’t know if arguments such as the ones I have were what helped him, but I have strong suspicions that when we read his book we’ll see that something like them did the trick. Below is an essay I modified from a forum version located here.

Antony Flew argues essentially that theists have the burden of proof whereas atheists have no obligation of their own, with the implication then that atheism is a negative position, a denial of a position and not a position in itself, rather than a positive one.

It goes without saying, but as this aims to be brief, you’ll need to read the links below in order to adequately follow the arguments in the essay.

The Flew-Wisdom “Gardner Parable” emerged in Flew’s famous work, “Theology and Falsification.” The idea is that one can invent all sorts of entities that cannot in principle be detected, and God is not much different than any of them. This is why we have illustrations like ‘Invisible Pink Unicorn,” the “Dragon in the Garage” and Dawkins’s current favorite, the “Flying Spaghetti Monster,” all put forward by ‘free-thinkers’ guided in their thinking by the concepts in Flew’s parable.

The Flew-Wisdom “Gardener Parable” not only presents the ‘presumption of atheism’ argument in a potent form but also provides the argument’s Achilles Heel.

In the Wisdom-Flew Gardener Parable two men, a believer and a skeptic happen upon a clearing where there was “growing many flowers and many weeds.” The believer posits a gardener, the skeptic disagrees. Through various contrivances the believer’s gardener, if it is to exist, must exist in such a qualified form as to be indistinguishable from no gardener at all. But what this parable illustrates in crystalline form is that it is not the definition of the gardener that we begin with at all, but rather a clearing “growing many flowers and many weeds.”

One supposes from the parable that there is something about this particular clearing that gives us the impression that this clearing is, in fact, a garden. In other words, what meets both men’s senses is that they are in the presence of a garden, with the intuition that where there is a garden, there is a gardener. Our believer need not go any further then he is portrayed as going. He could simply point to the ‘garden’ as prima facie evidence of a ‘gardener.’

Our skeptic has an obligation to show how whatever peculiarities gave rise to the suspicion that it was a garden in the first place are better explained via processes that don’t intuitively call for an intelligent agent. Unless, of course, our supposition is wrong and there is nothing in the clearing to suggest a gardener from the beginning.

Consider the difference in the argument if the scene that you arrived at was this one: 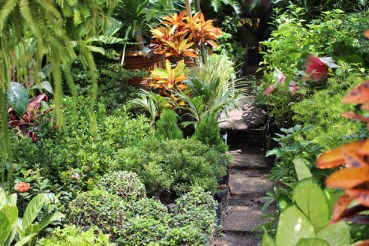 or if it was this one: 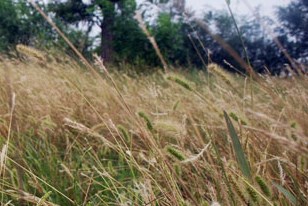 Which ‘clearing’ did our two explorers stumble upon?

Our parable does not say, and therefore we do not know whether or not there are suitable reasons for describing this clearing as a garden in the first place. Surely if the clearing is the first one above, it is the atheist that has a ‘burden’ to show that the prima facie inference is wrong. If it is the second, it is the theist. And if it is the second, and the theist meets his burden by invoking ad hoc explanations, clearly the theist’s arguments are tenuous at best. But we must first know which ‘garden’ we’re looking at.

Because of this fact, I think it is reasonable to say that Flew’s argument, so far as it goes, is valid. But it is based on some assumptions about the ‘clearing in the jungle’ that his parable is silent on. Perhaps the reason why Flew has abandoned atheism is not because he has found his argument to be logically flawed, but rather logically fulfilled. That is, he may have determined that the nature of the ‘clearing’ in front of his eyes really is best explained by invoking a ‘gardener’ and no longer finds such a conclusion as groundless.

We shall have to see, but I think it is safe to say that this is exactly the case for most theists therefore their position does not fall into the ‘jurisdiction’ of Flew’s argument.

Does the argument really reduce to a simple disagreement about whether or not the universe does or does not bear prima facie marks of a ‘designer’? Not quite, but that is not a fact that speaks well of atheism. For example, some atheists might allow that there are such prima facie marks but choose to interpret them in naturalistic terms under the very spurious assumption that they must do so (here they will invoke things like ‘Occam’s Razor’). Or, they might say- again allowing that the marks of the gardener might really exist- suggest that there is no difference between and no way to distinguish between a transcendent gardener and a super-powerful and technologically advanced alien.

Arguments like these show the real difference between atheists. Some are atheists because they simply choose to prefer naturalistic interpretations. Some are atheists that ‘follow the evidence, wherever it leads.’ Flew is in the latter category. Can it really be so that it is the theists who derive their views on evidences while the atheists generate theirs by presupposition?

Yes, it really can.