Dylann Roof’s Reaction to the Two Minutes of Hate

Kim Davis vs Gavin Newsom, Liberalism vs the Rule of Law

Anthony Horvath Public Testimony: Principles of self-government, rather than ‘pro-life’ principles, are controlling regarding Planned Parenthood

On September 2nd, 2015, I had the opportunity to give testimony for the Wisconsin state assembly’s committee on health concerning AB 310, a bill that would compel the state of Wisconsin to compete for Title X Federal dollars, which presently go exclusively to Planned Parenthood.  By the time I had my chance to speak, many people had said a lot of the things that I would have wanted to say, so I decided to focus on the ‘secular’ principle of the matter:  tax payers have the right to make demands about how their taxes are administered.  In our republican system, competing demands with 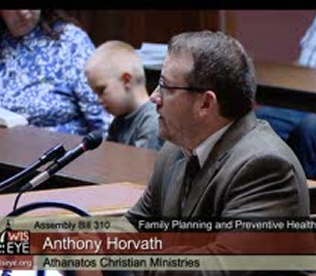 in the voting population about the administration of its government is essentially determined periodically in elections, at which point they choose the people who are most likely to represent their values and priorities.  Then, the elected representatives have every right to try to implement their point of view.  The details of that point of view are irrelevant.

From this perspective, much of the debate that I witnessed was irrelevant.  The minority on the committee, the Democrats, commanded the lion’s share of the conversation, and worse, behaved as though the authors of AB 310, and its supporters, had to justify themselves to them.  Nonsense.  The debate is indeed an important one, but it was already had in a series of election cycles, all of which Wisconsin state Democrats lost.  Resoundingly.  Wisconsin state Republicans won.  Overwhelmingly.  Not just once.  Not only twice.  Three times, since 2010.

My statements, then, reflect this reality.

If anyone is interested in watching more in the hearing, they can do so through this link.  The person who gave testimony that most closely aligned with the other things I would have wanted to say was Julaine Appling of Wisconsin Family Action.   One of the most pathetic testimonies I heard in defense of Planned Parenthood was from the young woman who spoke just before me, who credited Planned Parenthood with allowing her to be sexually active while completing law school.  That apparently constitutes ‘health care’ in the eyes of liberals.  Sad.  Just sad. Very reminiscent of Sandra Fluke.  My remarks, I believe, are around the 3:46 mark.

I had plenty of other things I was prepared to talk about.  I wrote the following piece in anticipation of the event, as a way to organize my thoughts.  I did not submit it as written testimony.  It draws a starker contrast between the warring value systems that are in play on the abortion issue and why, consequently, the principle of self-government is so important.

Lawrence Lader was a contemporary of Margaret Sanger, the founder of Planned Parenthood.  He was an enthusiastic supporter of Sanger and the mission of Planned Parenthood.  He wrote a biography of Sanger, as well as other works on the abortion issue.   One of his books was cited approvingly eight times by the majority in Roe vs. Wade.  That should give you an idea of the kind of clout that Lader had on this issue.

He was also the author of the book Breeding Ourselves to Death.  The book, written in 1971, details the woeful funding for ‘family planning’ in the 1960s and laments that nearly all of it came through private donations.  They are all convinced that the job is so large that only a massive government effort could do it.  Judging from the title of the book, you may be able to guess at the ‘job’ they thought needed to be done.

But Lader is hopeful.  As he is writing, Richard Nixon has just then signed into law the “Title X Family Planning Program.”   The $218 million that Lader gleefully reports has been spent by the Federal government on family planning in just that one year dwarfs the tens of millions that had been donated by individuals and corporations in the 1960s.

I use the example of Lader as my entry point in discussing the issue of Title X spending to illustrate the fact that this legislation was born of values and principles that many of us would find reprehensible.  On his telling, Americans are like a ‘herd’ to be managed.  That is a far cry from a view which sees our fellow citizens as having intrinsic value and dignity, and implies a special class of ‘managers’ to tend to the herd.  And isn’t it sometimes necessary to ‘cull the herd’?  The idea that abortion might be a kind of ‘culling’ is abhorrent to most people, but listen to this statement by the Supreme Court Justice Ruth Bader Ginsburg, in a 2009 New York Times interview:

Frankly I had thought that at the time Roe was decided, there was concern about population growth and particularly growth in populations that we don’t want to have too many of. So that Roe was going to be then set up for Medicaid funding for abortion.

Ginsburg, naturally, insists that she does not align herself with this viewpoint, but my point here is that during that time period when Title X was being passed and funded and Roe became ‘law,’ Ginsburg herself acknowledges that many people saw abortion on demand as a way to reduce ‘undesirable’ populations.

What we have here is a clash of first principles.   There are warring value systems at play here, which are in many respects irreconcilable.  Those of us who believe that humans at all stages of development have intrinsic worth must be careful not to accept premises that are incompatible with that belief.  So, while we could perhaps go into the weeds on the different ways these Title X dollars might be spent appropriately, to my mind, the most pertinent issue at present is this:  anyone that has explored the ideological foundations of Planned Parenthood knows that its founder, its champions, and its advocates can in no ways be trusted to administer tax-payer dollars in a way that reflects values compatible with a ‘culture of life.’  We know that much, at least.

Planned Parenthood presents itself as a charitable organization serving the common good by providing a ‘public health’ service.  Let us suppose, for a moment, that they mean that sincerely.  Even so, I dare say that their definition of ‘health’ is one that many people would object to.  I know I do.  I know that hundreds of thousands, if not millions of my fellow Wisconsin citizens would beg to differ with Planned Parenthood’s views, as indicated by the consistent election, since 2010, of elected majorities that also reject Planned Parenthood’s views.

In my opinion, this is about more than the abortion issue.  The bottom line is that Wisconsin tax-payers should have the right to determine how their money is spent and how Federal dollars allocated to Wisconsin are stewarded.  It’s really as simple as that.  We want to see our values and principles reflected in our government.  In this particular case, the thing that we want is Planned Parenthood–completely defunded–now.