“The Christian religion is a very powerful
and convincing mistake, that’s all.”
(The Amber Spyglass by Philip Pullman)

This bulletin insert/parent’s guide has been downloaded over 1,500 times! 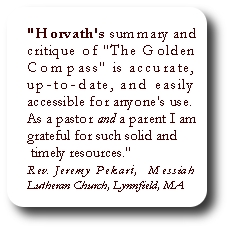 Please fill out the form below to generate the download link to the free, printable PDF “Christian Parent’s Guide/Bulletin Insert” responding to the Pullman series…

Philip Pullman’s “His Dark Materials” series has been termed the atheist’s answer for CS Lewis’s “The Chronicles of Narnia.” Pullman is not shy about his atheism, though he denies that his books are meant to promote it. No matter, his series is diametrically opposed to Christianity and Christian theism and now that it is entering the mainstream of American culture through that old standby, Hollywood, Christians need to take the series seriously.

Anthony’s ‘Parent Guide’ can also be used as a bulletin insert for churches to use on Sunday mornings. The guide/insert provides valuable introductory information so that Christians can grasp what is at stake and directs them to learn more.

Note, the content of the bulletin itself is cut and pasted below this form.

Anthony’s Book, Fidelis was given accolades on WorldnetDaily.com!

Would you like to listen to an interview with ReachFM in Florida about some of my other inserts? Here it is: InterviewWithReachFM (9.4 MiB, 2,258 hits)If you are interested in other bulletin inserts with apologetics emphasis, check into my Advent 2007 series.

“The Christian religion is a very powerful and convincing mistake, that’s all.”*

What is all the fuss about?

While there was some debate among Christians about Harry Potter, there is no need for debate about Pullman’s ‘His Dark Materials.’ Pullman’s anti-Christian agenda is abundantly clear. The first movie, “The Golden Compass” is coming out in December of 2007.

Writing for children, Pullman casts a vision of a world where there is no transcendent God and thinking there is one leads to all sorts of horrible things. For example, in one interview he says, “Our home is not somewhere else. There is no elsewhere. This is a physical universe and we are physical beings made of material stuff. This is where we live.”

While Pullman himself denies trying to single out Christianity for ridicule (all monotheistic religions are basically the same, he says), the values promoted and the themes explored are definitely opposed to Christianity. God is an evil tyrant whom many of the characters set out to kill… sound like an innocent children’s book to you?

How Should Christians Respond?

Though the Pullman series is positively hostile to Christianity and its values, it still provides the Church with the opportunity to explain and clarify just what Christianity is all about. We should not act as though we are afraid of these books.

Some Quotes from the Series:

“Somewhere out there is the origin of all the Dust, all the death, the sin, the misery, the destructiveness in the world. Human beings can’t see anything without wanting to destroy it, Lyra. That’s original sin. And I’m going to destroy it. Death is going to die.” (The Golden Compass, pg 377)

“…it’s my belief he turned away from a rebellion against the Church not because the Church was too strong, but because it was too weak to be worth the fighting.” .. “I think he’s a-waging a higher war than that. He’s gone a-searching for the dwelling place of the Authority Himself, and he’s a going to destroy Him.” … “He’s a-going to find the Authority [God] and kill Him.” (The Subtle Knife, pg 46-47).

“And the answer came back- no. No one will. There’s no one to fret, no one to condemn, no one to bless me for being a good girl, no one to punish me for being wicked. Heaven was empty. I didn’t know whether God had died, or whether there never had been a God at all.” (The Amber Spyglass, pg 445).

Reasons Christians Should Be Concerned about “His Dark Materials”

*It is written from a distinctly atheistic worldview in an effort to promote that worldview.

*It makes use of content that is promoted heavily in science classes, like evolution and quantum mechanics, suggesting his ideas are plausible.

*It dismisses important doctrines like ‘original sin’ as power ploys by the Church.

*The ‘God’ in the Pullman series is nothing like God as Christians understand Him, but young readers will probably not know this.

The Series in Nutshell

“The Golden Compass” begins with Lyra, a young girl living in another, parallel universe. She is accompanied everywhere by her daemon (pronounced: “demon”), which is in fact just her soul. In the second book, a character named Will emerges from our own universe. Lyra is shocked that Will’s daemon is inside him. The ‘soul’ is just a physical reality that in our evolved universe resides within us.

At the end of the Golden Compass, Lyra’s father breaks out of his universe in his quest to find and kill God, and tear down the ‘Kingdom of Heaven’ and erect the ‘Republic of Heaven.’ Lyra and Will have special instruments that factor into their own mission. Lyra has a ‘symbol reader’ and Will has a ‘subtle knife.’ The ‘symbol reader’ always tells the truth and the knife cuts through to other universes. With these tools in hand, Lyra and Will set out to open a way out of the realm of the dead. This first requires that they ‘die’ but once they succeed, they are able to re-unite with their daemon-souls.

In the final book, “The Amber Spyglass,” Lyra’s parents succeed in bringing down the ‘Kingdom of Heaven.’ Lyra and Will ‘save the universes’ after a character, Mary Malone, tells how she gave up being a nun because she couldn’t believe anyone could condemn her for wanting sexual pleasure.

Lyra and Will head off into the trees… and all is well. The Universes are saved.

The two eventually part, but look forward to building ‘the Republic of Heaven’ in their own universes.

One of the things that has bothered many Christians is how it seems that Pullman is writing with the specific intention of being the anti-Lewis. In an interview, he has even said that he ‘loathes’ the Chronicles of Narnia. This attitude clearly reflects the fact that Pullman has an entirely different way of looking at the world.

As the series progresses it becomes more hostile towards ‘God’ with book one containing little more than hints as to what is to come in future books.