Missing the Point on Bill Nye

Unraveling the Universe of Ideas (Part 1 of N)

That’s how I felt awhile back when I came across the ADL’s (Anti-Defamation League) so-called ‘Pyramid of Hate.’  How could an organization focused on preventing genocide fail to understand how genocides occur, and, with disturbing irony, in particular the genocide against the Jews under the Nazis?  Since they were not ashamed at their ignorance, I was ashamed on their behalf. 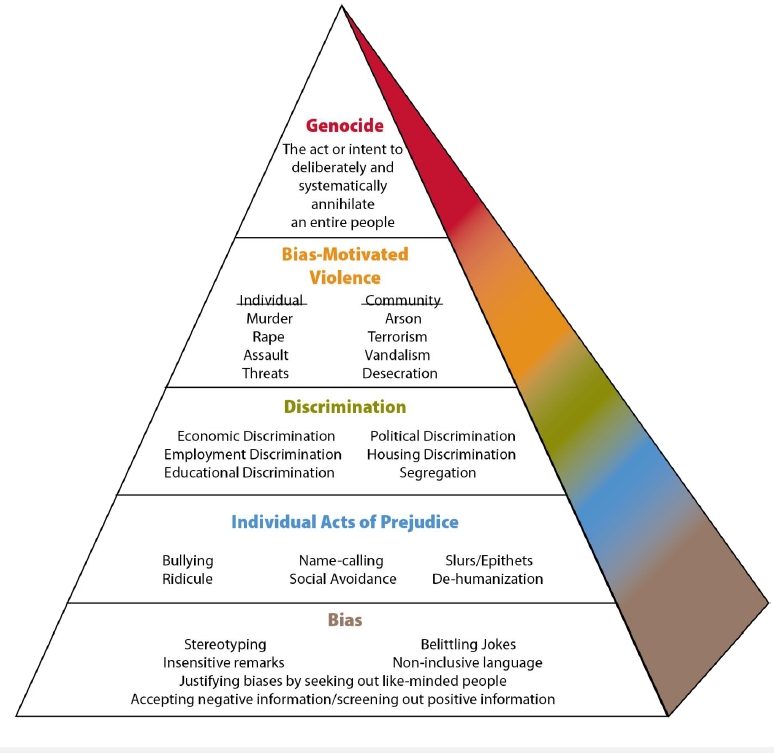 The ADL puts ‘hate speech’ at the very bottom of the pyramid (eg, “Belittling Jokes” and “Insensitive Remarks”) and moving up from there we have “Ridicule” and “Slurs” before we get to some of the more serious items, such as terrorism, etc.  This is almost as far from reality as one can get.  It is, in a word, typical liberal/progressive tripe.  Certainly, speech belongs on the ‘pyramid’ but it is not the cause.  It is the symptom.

The closest that the pyramid gets to the capturing the truth is “De-humanization,” which any sane look at the Holocaust and a proper ‘pyramid of hate’ would put at the very bottom layer of the pyramid.  The Holocaust was an outgrowth of an ideology.

The ‘hate speech’ that followed… followed.  It did not lead. The root was the ideology.  One of the first fruits was speech, but it is highly debatable whether or not later fruits were built on speech.  Rather, there was a branch, with many fruits, and ‘speech’ was just one of them.

Fixating on the Nazi’s ‘speech’ as a root cause of the Holocaust is a total swing and a miss.  The focus should be on the underlying ideology.  And that’s where things get really interesting, and really troubling.  The Nazis launched their program for euthanizing the disabled on the basis of an international consensus among scholars that the disabled were harmful to the species, and, at any rate, putting the disabled out of their misery was the humane thing to do.  (Is anything already starting to sound familiar?).  A notable example comes from Karl Binding and Alfred Hoche, two German academic luminaries, writing a couple of years before the Nazi party even existed.  Their little book “Allowing the Destruction of Life Unworthy of Life” merely recapitulated a manner of thinking that already had gained broad, international, currency.  When the Nazis launched their T4 program, they were only putting into action the ideology already established as ‘mainstream’ all around the globe.

No surprise, then, that when post-war trials were held at Nuremberg, the accused Germans submitted examples of people having similar beliefs as the Nazis, who, by the way, were not Germans.  (Eg., Madison Grant.)

There was an ideological underpinning to the Nazi extermination of disabled defectives.  There was an ideological underpinning to the Nazi’s anti-semitism.  These ideologies had their critics, no doubt.  But these ideologies were also widely taught in universities across the globe, too.  Even more fundamental than ‘De-humanization’ was the role of the University in cultivating certain attitudes which were presented to young people as facts–indeed, scientific facts.

Hold that thought, and fast forward.

A couple of months ago, I wrote an essay warning of the coming violence–emerging from the American left–as a result of Trump’s election.  There has been a steady stream of violence emerging from the American left ever since.  On my Facebook, I predicted that there would be Trump supporters dead in the street.  Today, we came very close to seeing that prediction come to pass.

So now we hear all of the same crap that we always hear.  Eg, we need to tone down the rhetoric.  Or, perhaps my favorite, which I heard today, “I wasn’t making an equivalence between left and right wing incitement to violence. I was saying that the right, at present, is worse.”  The right is worse?  HA!

This seemed to be an example of something I’ve heard conservative commentators mention numerous times over the years–that the Left has a habit of accusing the Right of doing the things that in fact are actually done by the Left. (Tucker Carlson talked about it tonight on his show.  It was the segment with the Federalist writer, iirc.  Rush Limbaugh has said it many times)

Or, as it was put on Carlson’s show:  On the ‘right’ we have rhetorical violence… but on the ‘left’ we see literal violence.

But why is this the case?  Why is there a difference?  Why will the difference persist?  I will tell you why.

To hear the pundits and politicians tell it, they will spout out the same line that the ADL did: it all starts with ‘hate speech.’  It’s because of all the invective that is out there, and the hateful remarks, etc.

And don’t get me wrong, I think ‘speech’ is an ingredient.

For example, I think the Democrat’s continued insinuation that Trump has committed actual treason, and the MSM’s continued fanning of those fabricated flames (eg, ‘Russian collusion’) certainly has the power to lead people to reason, “Why, if that’s all true, then by golly, we’ve got to act!”  These ‘low information voters’ don’t understand that the Democrats and the MSM are only using these issues as political bludgeons.  There seems to be no merit to these accusations, but not everyone knows that its merely the same old Alinsky tactics.

But this does not explain the vitriol and violence, the ‘illiberal’ behavior, that has been bursting out at college campuses, etc, supposedly in the name of ‘tolerance’ and in alleged defiance of fascist ‘hate speech.’   This started long before Trump was elected.

What does explain it?

Very simply, all these youngsters were taught to believe these things in the very place that a great deal of history’s greatest atrocities emerged:  the University.  What they learned in the University, the MSM and Hollywood repeated (endlessly).

They learned that certain things were true… were facts… were scientific facts… in their classrooms.  Honestly, it begins even before college.  It starts as early as elementary school and I can give personal examples of this mindset being propagated in high schools.

This is why there is no good reason to think that the American left will cease being violent–education in America is almost completely dominated by leftists, churning out a particular ideology, which, as it happens holds that dissenters are hateful fascists–and what does one do to fascists?  This meme that I saw last year sums it up: 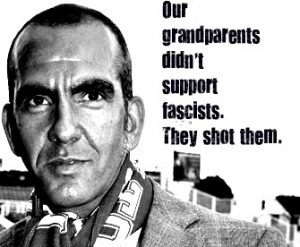 And that’s why the “Right’s” violent rhetoric will probably remain nothing more than rhetoric; ie, it is actually intended as rhetoric, as evidenced by the fact that when you probe the underlying ideology, you will usually discover that most people on the ‘right’ have no desire whatsoever to act violently, because, generally speaking, they genuinely believe that people have intrinsic value–created in the image of God, if you will.  Thus, to actually harm someone flies in the face of one’s actual ideology.

But the Left’s literal violence, will persist, because according to the ideology that people are actually being taught, people who disagree with progressives HAVE IT COMING.  Obviously, there is nothing in any curriculum as direct as that, but just as there are those who don’t understand that the Democrats accusations of ‘treason’ are mere political tactics and, on their own, draw out the implications, so too the professors (etc) don’t need to spell it out, either.  Their students put two and two together all on their own, thank you very much.

So, you can have two people saying exactly the same thing:  “I’m going to kill you!” but one offers it out of exasperation, while the other actually means it.  The only way to know which is which is to look at the underlying ideology.

The rhetoric is a problem, but it is not the problem.  The problem is the ideology.   There is no indication yet that leftists have any inclination to re-think their ideology.

Will today’s assassination [attempt] diminish the vitriolic rhetoric coming from the American left?

But will today’s assassination attempt cause anyone to evaluate their ideology?

And since the ideology remains, it is reasonable to expect the behavior to return.