Pro-Life Apologetics Conference: Defending the Faith is a Defense of Life

In just a little over a week, my ministry, Athanatos Christian Ministries, will be hosting our fourth annual online apologetics conference.

Each year, we pick a theme in which apologetics is integrated and applied.  Previous years saw apologetics incorporated into the arts, etc.  This year, the theme is life issues, and abortion in particular.

One’s views about God tends to impact one’s views on Man.  It is not a coincidence that people are more likely to describe themselves as pro-life if they are a Christian and pro-choice if they are an atheist.  On the former view, people have intrinsic value, and so there are boundaries to what you can do to them and for what reasons.  On the latter view, people are just ‘meat machines’, and how you treat them depends only on the consensus of society.

Ironically, despite these two views being essentially two sides of the same coin, the secular humanist regards the Christian view as merely religious–and therefore not permitted expression in public society–and their view as purely scientific, so they can do whatever in hell they want.

Of course, on their view, Christians are part of society as well, and since all values are determined by ‘might makes right’ at the level of society, there is no particular reason why Christians can’t impose their notions.  Similarly, one cannot object if some other society–say, the Nazis–think that ‘defectives’ should be eliminated.  But they do object…. but I will explore this incoherency in more detail in my presentation at the conference, ‘Christianity and Abortion.”

But I did not choose this theme with atheists in mind.  Instead, I had Christians in mind.  How many times have I chatted with fellow Christians (or had them send me angry emails) insisting that Christianity ought not be involved in ‘political’ affairs at all?  I’ve had pastors tell me that the mission of the Church was nothing more than the preaching of the Gospel and (rightly) administering of the Sacraments, or, more generally, Christians say that our business amounts to nothing more than evangelism.

On the face of it, these Christians seem to be taking a high view of their faith, positing that it is above the fray of merely temporal affairs, but in reality, it implies that Christianity is not actually true.

The idea that ‘faith’ is some kind of ethereal disembodied set of notions that has no bearing and impact on how we live our actual lives is closer to docetism, or perhaps gnosticism.

It is a question of what is real and true about the universe:  are we all, in reality, creatures made by God and then redeemed on the cross–even before we were born?

Did God really come, in the flesh?

When God made everything, did he not in fact declare it ‘good’?  Isn’t it an implied aspect of the incarnation itself that ‘temporal’ affairs aren’t inconsequential?  He became ‘temporal’ for our sake.  Theoretically, he could have just simply stated that our sins were forgiven without entering into our affairs to suffer and die via the machinations of the Jewish and Roman legal systems.

Is, “he suffered under Pontius Pilate” an article of faith, or a fact of history?

To the degree you believe the latter, rather than the former, you will recognize that we cannot possibly regard ourselves or each other as disposable sacks of flesh.  My observation is that those who believe the latter is supported by objective, solid evidence, tend to put a high value on each human life, born and unborn, young or old, able or disabled.

Thus, it follows that if one were interested in advancing ‘pro-life’ causes, the most effective way to do this would be to create more Christians and equip them with solid reasons for believing that what they believe is actually true–objectively true.  The rest would practically take care of itself.

And that’s why this year’s conference theme links two topics that I do not believe have ever been so explicitly connected before:  Defending the faith IS a defense of life.

I will certainly grant that the above leaves unaddressed a number of important issues and topics.  I certainly don’t want anyone to think the solution is to create a theocracy.  I believe the framers of the Constitution struck the right balance on that score, and that at any rate, we are about as far away as a theocracy as one can get.  We are on the verge of an ‘atheocracy’, if anything.  There is a balance to be struck, because it is just as certain that this earth and all that is in it will pass away;  we should give priority to eternal things, not temporal things.

But perhaps that is my point:  the only thing that will last (on the Christian view, if Christianity is true) in this creation are the people.  If the Gospel is not for them, for all of them, by definition, then are we quite sure we are really preaching the Gospel of eternal life if we are not prepared to stand and defend life in the ‘here and now’?

The conference does not aim to answer that question, but I think it provokes it, and I hope it generates good and fruitful discussion.

The conference is April 21-23 and held entirely online.  Registration is $19.95 and you can attend the first day for free, although you will still need to register.  Learn more and register here:  http://onlineapologeticsconference.com/ 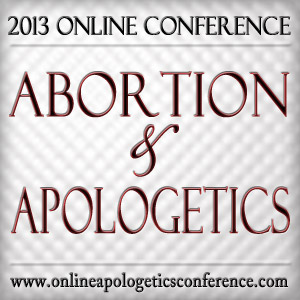