Coronavirus: Where are all the dead Americans?

Lots to say these days, but I have a life.  It may surprise some–it won’t surprise those who know me best–that my life hasn’t changed much due to these lockdowns.  When you are a quasi-prepper who anticipated such things years ago, you’re already well ahead of the curve, ya know?  So, my life continues basically as normal, which is to say, I’ve got things to do!

But I just wanted to take a minute to highlight the curious case of Germany.

As I write, Germany has only 20 deaths with 7,600 confirmed cases.   Italy has about 28,000 cases and 2,158 deaths.  Both appear to test very aggressively, unlike the US, where we have born witness to an unmitigated failure of the Bureaucrats.  I know what you’re wondering… what is the difference between these two countries?

Is it the health system?

Maga also stated that healthcare structures are rather similar in northern Italy, France and Germany, making it harder to justify such discrepancies in numbers.

Well, gosh, since we’re in the season where if you don’t accept the word of the experts immediately and unconditionally, why don’t we ask them?

From the same article:

Meanwhile, an Italian virologist said the low number in German deaths “is a question no one can really answer”.

The experts don’t know?  Dammit!  Now what are we going to do?  Without someone doing my thinking for me, I am at a loss!

Of course, the experts in the article proceed to say that they expect Germany to end up where Italy is, anyway.  You know, because we’re not allowed to consider the possibility that Germany, South Korea, etc, are the norm, and Italy is the outlier, so naturally Germany must eventually go to hell, too!  Obviously.  LOL.

All of the panic and hysteria is based on the premise that WE WILL BE ITALY.  I’m sorry, but why can’t we be Germany?  Or even South Korea?  Why MUST we be Italy?  (Unless we shut down our country, cuz reasons).

This seems like an obvious question.  I would think that the fact that Italy is actually faring worse than China would startle even the tamest of sheeple into an original thought.  But ok, whatever.

Notwithstanding all that, there was a bit of silliness I observed while researching this question which has obvious applicability to our own situation in the US, both regarding the coronavirus and in later years.

About a week ago, German officials pompously declared that travel bans would not do anything to stem the tide.

Health Minister Jens Spahn has led the response, and said earlier that sealing Germany’s borders to prevent the virus spreading would not work, rejecting calls to follow neighbour Austria in denying entry to visitors from Italy.

But effective a day or so ago, Germany shut its borders.

Poor Jens Spahn!  Because when the chips are down, everyone knows that measures like closing the border makes obviously good sense.  You can bet that Italy wishes it had done so a month ago.

Here in America, we have much the same kind of lunacy.  In an article I linked to in my post yesterday in which it was argued that coronavirus has been with us already for weeks (and this was back in February),

Ultimately, Seattle’s experience shows the futility of travel bans in the face of a pathogen that’s sickened more than 110,000 people and killed more than 3,800 since authorities in China on Dec. 31 reported a mysterious viral pneumonia linked to an open-air seafood market.

Russia would beg to differ!  Russia closed its borders weeks ago.   Would you like to know how many cases and deaths have been reported there?  As of this writing (3/17), 93 and ZERO, respectively.

If they don’t work, why are all the countries doing it?  DUH.

But here in America, we have an additional lunacy:  people decrying travel bans, securing our borders (eg, the southern one), bemoaning the economic impact of keeping tourists out of our country, while meanwhile not merely applauding the shuttering of schools across the nation and welcoming locking people up in their own homes for weeks at a time, but shaming those who dare go out!

Read that again:  foreigners can come and do as they please, because it will do nothing to stem the illness if we prevent them from coming, but AMERICANS must be confined to quarters.

LOL.  These are the supposedly ‘smart’ people.  Thankfully, when the chips are really down, authorities put aside their political fantasies and do the obvious thing:  they shut down their borders.

Let this be remembered once this all clears and we revisit the situation on America’s southern borders.  You remember, right?  Any mention of the possibility that the hordes of undocumented individuals coming over the border might carry with them infectious diseases got you marked as a bigot and a xenophobe.  Do you remember that?  I do.  They said that locking down the border would do nothing about such things.

But the proof is in the pudding.  The facts are facts.  Reality is reality.  Logic is logic.  When the chips are down, we lock down the borders and we limit travel.

Or is that just wishful thinking on my part?

take a look at this chart and tell me there ain’t something wrong with Italy, and tell me again why it is that Italy tells our future and not, say, South Korea.  Feel free to play with the data set yourself:  source. 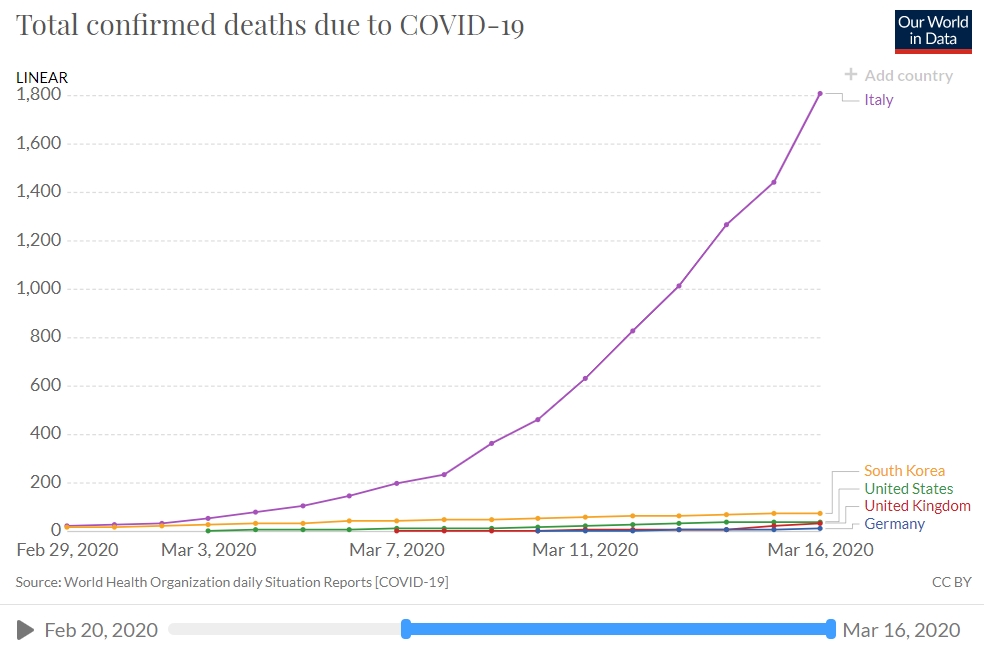