What Went Wrong With the Left?

This is why we absolutely hate the ‘New’ Left

I’m breaking my ‘wait a while’ rule and interrupting a more substantial series, but this little tidbit was just too ‘good’ to pass up.

Why do conservatives like myself utterly despise what the ‘left’ has become?  Or, if you prefer, became, c. 1910?

Well, there is a long list, really.  Of late, we’ve witnessed two years worth of outright fabrications of racism and character assassinations, cheered on by even the ‘best’ elements within liberalism.   Lest this post get overwhelmed with a detailed list of the vile things that liberals have done or advocated, let me get to this doozy, here.

So, evidently, the police were called because ‘Pepe the frog’ was pasted onto the door of a professor (a bad person who thinks he/she is good).  Here is the pic: 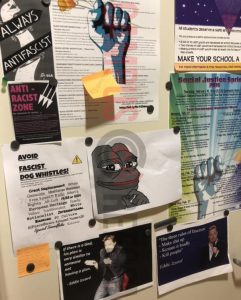 You can see the frog there in the middle.  Let me break it down. 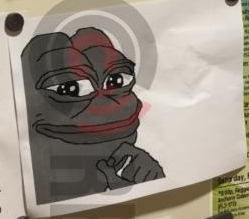 …was ’embraced’ by people on the ‘right’ only after the ‘left’ accused the ‘right’ of utilizing it as a racist ‘dog whistle.’  This is acknowledged by an article ‘putting the frog’ in context, provided by the university itself.

Now, regardless of how you feel about Hillary Clinton, we can all agree that she isn’t exactly down with the kids. So when she denounced Pepe the frog as a symbol of hatred, the internet practically drowned in laughter. But this was the general public’s first proper introduction to Pepe, and first impressions tend to stick.

After the laughter died, the media continued to label Pepe as an alt-right icon, and the alt-right dutifully embraced him.

Translated:  the liberals and the mainstream media (but I repeat) behaved like jackasses and the ‘right’ thought it would be hilarious to turn the accusation around on liberals and use it to mock them ceaselessly and endlessly with it.   But it is the fault of the ‘right,’ you see.  Not the liberals.  Oh no, they are as innocent as the wind-driven snow.

Now, the Frog has indeed been used to good effect to mock the ‘left,’ but that’s really all its been.  Mockery.

But let’s see what else is on that door, shall we?  I’ve helped you out a bit: 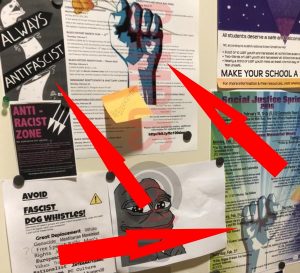 In the top left is a reference to Antifa, an organization which has literally engaged in massive acts of violence that exhibit every trait of… wait for it… the very fascism they claim to denounce.  The other two pics are, yes, that’s right, the communist fist.

Now, no ‘Pepe’ fans have yet to kill a single person that I’m aware of.  Even if we accepted the silly idea that Pepe is the new swastika (ha ha ha ha ha), the Nazis killed perhaps 10,000,000 people.  A dark chapter in human history, no doubt.  But oh what a reach to get from Pepe to Hitler!  And yet, your pure-hearted liberals managed to pull it off all the time.

Go ahead. Google it. Notwithstanding the abject silliness of that enterprise, let us now consider how many people have been murdered under the Communist Fist.

There were various other regimes which murdered under the sign of the Fist which also killed huge amounts of people, although Mao and Stalin appear to be the current title holders.  Tossing those regimes in with the four listed above we can produce our ‘back of the envelope’ amount:  125,000,000 at minimum.

If it was just this loser of a SJW professor, I might have let it slide as just another day in the life of contemporary American progressivism.  It seems all the universities have their freak leftist professors these days.  Still, isn’t it strange that a professor is unaware of how vile the “Fist” is?  Anyway, like I said, insane leftist professors are a dime a dozen.   But, I couldn’t help but notice that the president of the college was the one who appears to have written the letter; at the very least, her name is affixed.

The only thing that we can say about them in their defense is that they are, for the most part, too stupid to know what their ideology has actually brought forth in the last 120 years.  They are too dumb to understand what the Fist means, and what it meant to those who were turned to pulp in its grip.

While their ignorance means we need to treat them with a certain level of graciousness, it does not make them any less dangerous.  Worse still, the liberals who do know are completely silent.  Worst yet, is the continual societal pile-on of CONSERVATIVES, who have done none of the things they have been accused of doing or advocating, and yet can expect endless accusations to spew forth.  In the meantime, LIBERALS claim the moral high road with the obliterated skeletons of hundreds of millions of people in their laps.

The 20th century was one of the bloodiest on record, and the vast majority of that blood was shed under a symbol which modern liberals embrace without half a thought.