About a week ago, I drilled into the incessant, breathless panic-mongering that led to our entire nation’s response being pegged to the ‘possibility’ that we would end up like Italy–all the while ignoring the fact that there were other possibilities, too.  Why might we not end up like Germany?  Or South Korea?

Don’t people know that we had our first confirmed case of coronavirus before Italy?  Instead of asserting that “WE WILL BE LIKE ITALY! AAAAAAAAAAAAH!” why not ask “Why is Italy so different than the US?”  Clearly, its not the evidence which is forcing us to choose Italy as our guide rather than Germany or SK.

I have much to say about this, but for now, I thought we’d have ourselves a little look at how the situation has unfolded.

On top of that, the testing programs are varied.  South Korea, for example, has been testing robustly.  When it says that they have 9,037 cases, that’s probably very close to the actual figure.  The United States, on the other hand, majorly fouled up its testing program, and has only begun testing in earnest.  Everyone believes that the actual number of cases is far beyond the 46,168 reported as of today.  Then there is the fact that even having the tests doesn’t mean that people are being tested.  In the UK, early on, they stopped testing people with mild cases.  In the US, as well, they don’t test mild cases.

These considerations have to be incorporated into our analysis of charts like the one below.  But they have other implications beyond the chart.  For example, we are breathlessly told… or shall I say, scolded… that there is no reason to think the 2009 swine flu outbreak was comparable to this one, because, after all, the CFR was much lower with H1N1(2009).  And don’t you dare bring up the flu, which has still killed 10x more people just in the last 2 months than COVID-19 has in the US to date.  The flu has a CFR of .1.  H1N1 has a CFR lower than that (although they originally feared it would be as high as 10).  The problem?  To illustrate, the CFR of H1N1 is based on a calculation of 12,000 deaths (in the US) divided by the number of cases, estimated to be more than 60 million.

But you don’t think they tested 60 million people, do you?

Likewise, though I put the current CFRs on this chart of some countries, this is in some ways very misleading.  In the US, the CFR (as of today, anyway) is really only tied to those who ‘qualified’ to take the test, which means that they had some cause to suspect they had the illness.  We have not and never WILL test all those suspected of having COVID-19.

With it agreed by all that one of the problems with COVID is the fact that far more people exhibit NO symptoms at all, and yet can be carriers, it follows that the true CFR must be much, much lower than the 1.26 it is today.  As low as the seasonal flu, of .1 ?  Well, we don’t know.  And frankly, with how so many people are invested in justifying the panicked lockdown of the entire country, I suspect we’ll never know.  By ‘we’ I mean the general public.  But I digress.

The point is that we have to be careful with these numbers.  And we have to remember that they will have changed after I post this.  If they change in a way which ‘harms’ my perspective, believe it or not, I am NOT invested in maintaining the viewpoints expressed in this post and others I’ve made.  My goal is to base my perspective on the FACTS and plain reason.  Obviously, if the facts change, the reasoning changes.  And I’m willing to follow the evidence where it goes.  For those willing to do the same, I offer: 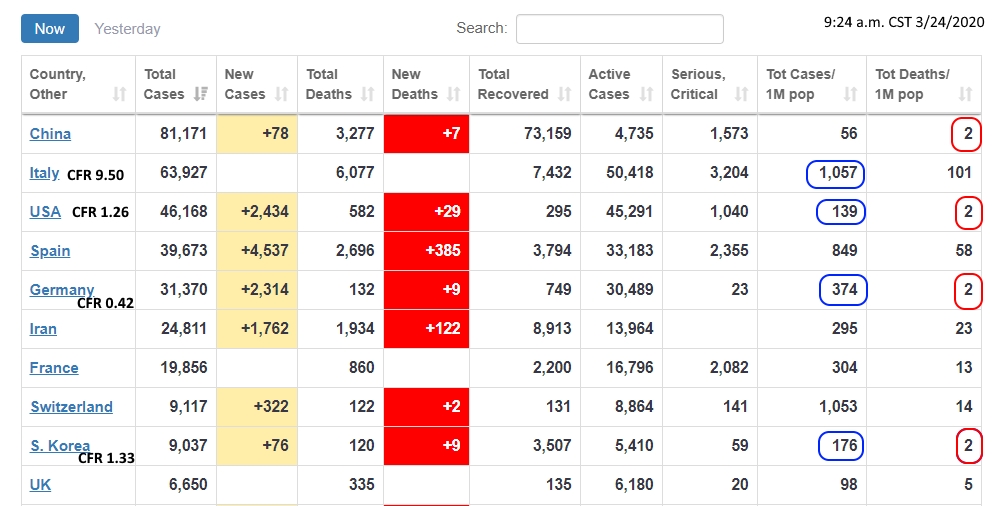 Ok, so one of the ways we can attempt to compare ‘apples to apples’ as far as how bad an outbreak is is to go beyond the raw number of cases and deaths and look at how it compares to the overall population.

Italy has a population of 60,000,000.   The US has a population of 330,000,000.  Obviously, you would expect there to be more cases in the US because there are more people to infect.  With the caveat that there are far more than the 46,000 actual cases in the US, we let our eyes move over to the Tot Cases/1M pop as a way to more appropriately compare the two.  What do we see?

Italy has 10 times more cases per million people than the US does.  How does the US compare to other locations, folks…. ahem, like me… have been talking about, such as Germany and South Korea?  Well, look at that!  As far as cases go, we have LESS than both South Korea AND Germany!

Here, the fact that the true number of cases, especially in the US, aren’t even detected does not harm our weighting of this observation, because again, the ones not detected are people with such mild cases that many times they don’t even know they have the illness at all.  This is not true in SK, as discussed above.  I don’t know where Germany is in this regards.

Now let our eyes go all the way to the right to see the number of deaths per millions.  Here we see something very, very interesting… You see all those red circles?  Yea.  That’s 2 people per million dying in the United States, Germany, South Korea, and even China (if you can believe China).  And what about Italy?  Remember Italy?  Italy, our Inevitable Disaster Unless We END America As We Know It?  A whopping 101.

I ask you AGAIN:  do we have ANY reason to think we will end up like Italy, and not like Germany or South Korea?

Obviously, the measures you think we need to consider will be highly influenced based on your answer to that question.

Personally, I think it seems pretty well self-evident that there is something seriously, seriously, seriously, wrong with Italy, which is NOT wrong in the rest of the world.   Only Spain looks especially shady, but even they only have a little over half as many deaths/million than Italy.

I have to say this because people think that by putting things into perspective I am ‘minimizing’ the issue.  Uh, no.  If there is any ‘minimizing’ being done by anyone or anything, its the ‘data’ that is doing it.  All I want to do is make sure we keep our perspective grounded in the real world and kept in proportion.  These deaths are tragic–as all deaths are–including the tens of thousands who die every year to the seasonal flu and the 12,500 that died in the US thanks to H1N1(2009).  But these deaths are worse in the sense that they are the result of a bad actor:  China.  Never forget.  I won’t.

The final thing I’ll call your attention to with the chart is the CFR.  Again, Italy has a CFR of 9.  This is bonkers.  Do we have any evidence to think we’re going to be like Italy?  Well, you can see that our CFR (with all the caveats above) places us right next to South Korea and not too far from Germany.

As things stand now, it is Italy that is the outlier.   It is irrational to believe, on the data in hand (and, I should add, the data we’ve had this whole time! excepting the fact that our testing was poor), that Italy was or is our inevitable destiny.

Now, a couple of things before I close.

First, it will be said that we can credit our low numbers to the harsh measures we have taken in the United States.  It’s amazing that anyone could say this.  I mean, you DO KNOW that Italy enacted extremely harsh measures a WEEK before states within the US did?  Right?  And Italy is nonetheless bonkers, even with their harsh measures.

Maybe the problem was not chiefly with the lack of social distancing… which may mean, conversely, that the solution is not social distancing.  It’s not simply a matter of people getting infected, its what happens after they are infected.  Clearly, Italy has something very ‘off’ in this regards.

Secondly, that same spirit, the numbers we are seeing now are from BEFORE our measures went into effect.  It follows logically that if people are locked in their homes that if they nonetheless get the disease, its pretty much because they had it from BEFORE they got locked into their homes, and it just took that long to manifest.   While it is reasonable to think that our numbers are going to go up in the next 7-10 days (thanks largely to certain states I will mention below), we observe that even with that being the case, we’re still not going to be Italy.   (Sorry?)  However, if after 14 days our numbers continue to go up ‘exponentially’ it is not going to be because of the disease, its going to be because of something else.  Perhaps more incompetence by the CDC?

Thirdly, the same considerations which force us to think about the difference in cultures, population size, etc, when it comes to countries, reminds us that the same is true of the states.  As of this writing, the US has 587 deaths.  But:  183 of them are from New York (NYC, I assume) and 110 of them from Washington (Seattle area).   In other words, more than HALF of the deaths in the US come from TWO locations.  What do these two locations have in common?  THEY ARE BIG FRICKIN’ CITIES.

For what its worth, if you chop out these 294 deaths and their corresponding cases, it leaves us with about 300 deaths and 20,000 confirmed cases.  While the CFR remains roughly the same compared to the rest of the country, the rest of the country is–can we be honest?–not likely to have the same spread, etc.   I’m not saying that the other states don’t have to take things seriously.  But what I am saying is that measures that might make sense in huge and densely packed population centers might be major over-kill elsewhere.  Maybe?  And if that over-kill means ushering in the next Great Depression, with tens of thousands of suicide, a decade of malaise, and maybe a third world war arising out of the ashes?

I’ll revisit this matter in a week or so.  I’m still looking for all the dead Americans.  I figure we have another 7-14 days before I can speak more definitively on that, thanks to the failure of New York, California, and Washington, to do what those of us in the Midwest had to do a whole week ago, despite it being THEM that clearly are the ones at the center of our troubles.