Easter is no Legend, the Resurrection is no mere myth: Myth Made Fact is a Different Story

Guards at the Tomb: Evidence of Jewish Guards at Jesus Tomb

How many guards at Jesus’ tomb?

This post has proved to be one of the most popular ones on this blog, drawing thousands and thousands of visitors or so each year.  I suspect that there are a lot of churches putting on Passion plays and they’re looking for some guidance on this topic.  This year, to enhance the service that this post has evidently provided, I have written a number of other essays that are meant to corroborate various claims made within the post.  This post, and these essays, is available as an ebook.  Use the menu at the end of this post to access the additional essays.

images posted under fair use provisions

Sometimes apologetics is about sifting out traditional accretions that in themselves are generally harmless but conspire to create a false picture.  When Christianity comes to be evaluated, it is this false picture that is attacked, unmindful of the aforementioned accretions.  This is sad, because virtually any Christian who has taken the time to familiarize himself with the actual facts of the faith is aware of what are accretions and what are not, but this doesn’t usually filter down.

As a case in point, consider the cherished traditional presentation of the birth of Jesus, what with the ‘three wise men’ coming to greet the newly born King of the Jews.   Upon examination, however, we learn that we are never told that there are three, that they came a couple of years later, and rather than ‘wise’ men they are ‘magi.’  The traditional presentation is harmless in the sense of conveying a certain tone during Christmas time but can be harmful, like for example when the skeptics get out their long knives and begin their hunt for biblical contradictions.

I use the ‘three wise men’ as an illustration of the idea but the example that I mean to dwell on in this post has implications that more seriously affect our perception of the Christian message, or more precisely, the veracity of it and the robustness of the claim that it is supported by the evidence of history.

If I were to ask you how many guards were at Jesus’ tomb after he was placed there after he was crucified, you would instinctively say ‘Two.’  When I was teaching New Testament that was in fact the common answer.  And who can blame anyone?  Look at the art and presentation of the Easter story:

You get the idea.

Now, who cares?  That is your next question.  Or, if you are a hard nosed cynic you’ll go looking for pictures with more than two guards depicted as though this diminishes my general point.  Let me state for the record that my problem is not with the depiction of only two guards, or three, but the general sense that at any rate, there were only a few guards at the tomb.  I know, I know.  You still want to know why it matters.

Really, this example is just one of several ‘accretions’ we see in the Easter story but this one I mention because a failure to recognize the truth actually serves to undermine the Resurrection story itself. 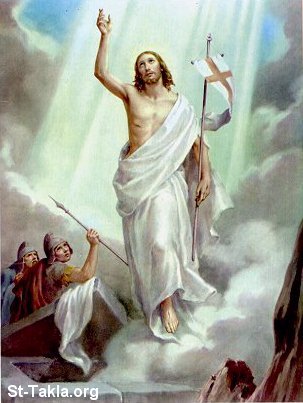 Consider the problem that the empty tomb presents in the context of this example.  If historically we are quite certain that Jesus was dead, was placed in the tomb, and that several days later the tomb was assuredly empty, we begin searching for explanations other than a resurrection.  Matthew itself presents the explanation that the guards fell asleep and the disciples snuck in and stole Jesus’ body.  (Note that this explanation assumes the tomb is empty and that Jesus’ body is missing).

Such an explanation is much more plausible if there are only two guards present at the tomb instead of, say, 16, 20, 40, 60, or more.   If that many were on duty it becomes hard to fathom how the kidnapping of Jesus’ body could be done without being noticed.

If these are in fact Roman guards, then four is in fact the minimum that protocol would dictate (see for example John 19:23), with each man taking three hours out of the night.  Earlier in the account of Jesus’ punishment, we already got a glimpse of this basic ‘squad’ unit, when we read in John that the soldiers divided his garments “into four parts, one part for each soldier” (John 19:23).

So, not two.  At the extremely conservative, bare minimum, we must say at least four.

If we begin to look at the matter from the basis of the evidence rather than from art work and conventional presentation I think it becomes clear that there were likely much more than four.  Begin, for example, with Matthew 27:64 where the Pharisees approach Pilate for guards because:  “Otherwise, his disciples may come and steal the body and tell the people that he has been raised from the dead.  This last deception will be worse than the first.”

Pilate responds with “Take a Guard.”  Although there is ambiguity here in the Greek, I believe the context affirms that reading, meaning Roman soldiers were dispatched.  Please keep in mind that by ‘a guard’ it would be like saying a ‘squad,’ where the singular implies a plurality.  Eg, if he had said “Take a Legion” we wouldn’t foolishly believe Pilate appointed just one man.

Pilate then tells them to make the tomb as ‘secure as they know how.’  How many guards might we imagine they would decide to send if they were afraid of Jesus’ disciples stealing the body?  Well, at the minimum, you know there are 11 disciples out there, so I imagine if you are trying to thwart them that you would have at least as many soldiers as you had people you feared were coming.  If you had half a brain (and I believe the Romans did in such affairs) you would send twice or thrice the amount.  If you said twenty Roman guards here I think that would be a conservative but safe estimate.

I highly doubt too that the Pharisees wouldn’t have some of their own temple guards on site, as well.  (Who better to suggest to the Roman guards to go explain the matter to the chief priests rather than go back to Pilate and be put to death for letting a dead prisoner escape?  See Acts 12:19).  If I were them, I’d trust Pilate as much as I trusted the disciples.  I’d want some of my own men around.

One of the other often forgotten dimensions is that this all occurred during the Passover, when Jerusalem becomes flooded with pilgrims.  There are so many that they certainly cannot all fit inside the city walls.  The hills are likely packed with people camping out (and since they are all dressed the same in accordance with purification rites, you see the need for Judas to lead the way and then kiss Jesus).  Just a few days earlier all of Jerusalem was singing ‘Hosannah!’ as Jesus entered the city.  In other words, the Romans and chief priests both knew that Jesus didn’t have only 11 disciples, but 11,000.  Or more.  How many guards would you send?

Now we see coming into focus why when the facts roll in it becomes really difficult to believe the story that was circulated that Jesus’ body was stolen.  There were probably dozens of guards about.  Even if sleeping the guards would have heard something.  Rolling a heavy stone away (remember the women wondered how it was going to be done) would have required lots of grunting and probably the use of some tools.  This is not a quiet endeavor.  Then the disciples would have to slip away- with everyone of the guards remaining fast asleep- and not be spotted by any of the thousands of people camped out in the hillside.  Imagine going to a July 4th festival and smuggling a dead body out without being spotted by anyone.

So it becomes more important than we may have realized to understand the real situation of the moment.  It was the Passover.  There were hundreds of thousands of pilgrims in town.  Many of these were fans of Jesus.  The Romans knew this.  The Chief Priests knew this.  They would have posted guards proportional to the perceived threat.

How many?  I am not going to get bogged down into trying to give a firm number.   The Greek word here ‘custodian’ seems to have a variety of uses and may or may not refer to a specific Roman military unit.  In Acts 12:4 Herod dispatches “four squads of four soldiers each” to guard one man, Peter.  If it was perceived that sixteen men were needed to watch just one of the disciples one can only guess how many they thought were necessary to guard against a minimum of eleven.  If pressed, I personally suspect that thirty to fifty guards were present but even if there were only sixteen (per the Acts 12:4 model) it is virtually impossible to believe, seriously, that they all fell asleep and remained so as a bunch of disciples were slinking about, clawing at a honking big tombstone, and then extracting the body.  We are talking about Roman soldiers here, after all.

These sorts of considerations don’t enter our minds, however, when we don’t take the time to acquaint ourselves with the actual facts and assume that tradition was always concerned with precision.  In this case, the traditional presentation, if believed, aids in undermining our confidence in the resurrection account while a close familiarity with the text and context achieves the opposite.

Guards at the Tomb:

Comments have been disabled.