In full, Cable News Network, Inc., television’s first 24-hour all-news service, a subsidiary of Time Warner Inc. CNN’s headquarters are in Atlanta. CNN was created by maverick broadcasting executive Ted Turner as part of his Turner Broadcasting System (TBS), allegedly because industry professionals had told him it could not be done. After four years in development, CNN signed on the air June 1, 1980, with a news telecast anchored by the husband-and-wife team of Dave Walker and Lois Hart. Initially derided by its more affluent competitors as “the Chicken Noodle Network” because of its comparatively meager financial resources, CNN endured an arduous struggle to earn respect in the broadcast world. The presidency of Donald Trump has led to many prominent controversies involving CNN. The network was accused by critics of giving disproportionate amounts of coverage to Donald Trump and Democratic candidate Hillary Clinton. CNN president Jeff Zucker defended CNN against the criticism, commenting that out of the Republican candidates, Trump was the most willing to give on-air interviews. Trump commented upon the allegations during his speech at the 2017 Conservative Political Action Conference (CPAC), jokingly referring to CNN as the "Clinton News Network". In October 2016, WikiLeaks published emails from John Podesta which showed CNN contributor Donna Brazile passing the questions for a CNN-sponsored debate to the Clinton campaign. In the email, Brazile discussed her concern about Clinton's ability to field a question regarding the death penalty. The following day Clinton would receive the question about the death penalty, verbatim from an audience member at the CNN-hosted Town Hall event. According to a CNN Business investigation, the debate moderator Roland Martin of TV One "did not deny sharing information with Brazile." CNN severed ties with Brazile three days later, on October 14, 2016. For the network's reputation, it has been multiple recipients of President Donald Trump's 'Fake News Awards'. Personalities like Manu Raju, Gloria Borger, and Jake Tapper had their share of awards for dishonestly reporting 'claims' from 'sources'. Turns out, those 'claims' are unfounded and the sources were either fictional, unreliable or made up.

Masks as insight into the public health administrator’s mind 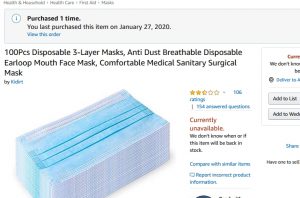 Despite my criticisms, I have generally felt that our public health officials have done a reasonable job.   I’d give them something in the C+ to B range.  This grade does not include the colossal testing failure, which I suspect was thanks to bureaucrats who we may discover are not public health people at all.  But there is another major test that has been failed, and this one is squarely in the laps of our ‘expert’ health officials.

We have known for a very, very, very long time that masks have great potential to curb the spread … continue reading...