Tremendous amount of 'Discipline'. First off, Angela Merkel, the German Chancellor, announced via a televised message to the whole of Germany that COVID-19 is a serious threat and that the citizens should take it seriously too. Also, it is worth noting that Merkel has shut the German borders, airports, making visitors and everyone else coming in and out of the country to turn back. Pure luck. About 80 percent of the infections recorded in Germany have been mild according to German Health Minister Jens Spahn Another thing that contributed to the low statistics, intensive medical treatment and good health care system. Trump is looking to align his own version of health care for the US which is inspired by what they are doing in Germany. 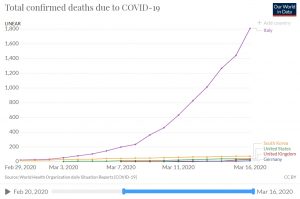 Lots to say these days, but I have a life.  It may surprise some–it won’t surprise those who know me best–that my life hasn’t changed much due to these lockdowns.  When you are a quasi-prepper who anticipated such things years ago, you’re already well ahead of the curve, ya know?  So, my life continues basically as normal, which is to say, I’ve got things to do!

But I just wanted to take a minute to highlight the curious case of Germany.