Whatever is true, whatever is noble: Christians are forbidden from being tools

Don’t be a Tool, You Child

I have been wanting to write this post for months and months, but have delayed doing so because I did not want any readers to think it was the result of any particular ‘national outrage.’  Not surprisingly, it is precisely because the phenomena I’m addressing is a constant, continual kind of thing, a ‘lull’ never came.  Well, it was starting to look like I would never write the post, so I’m just going to break down and do it.

Thus, I must issue this disclaimer:  THIS POST IS NOT ABOUT ANY PARTICULAR EVENT, AND THAT INCLUDES ANY EVENTS THAT MIGHT MEET MY DESCRIPTION THAT MAY BE TAKING PLACE AS I WRITE.

A second disclaimer:  my blog is generally trafficked by an, ahem, somewhat higher order of reader.  There is a chance, then, that if you’re reading this, this post may not apply to you.  In that case, I would suggest that you file this post away, and whenever you see someone transgressing against the principles described in this post, refer them to it.  The people who most need to see this post will not do so, unless you direct them.  The rest of this post is addressed to these people, even though they are unlikely to see it.

One of the things that I’ve learned about politics is that the one who sets the agenda is the one who has the most power.  No money gets spent and no decisions get made unless a matter is first brought into the proper channels for execution.  The people who set the agenda are not often politicians, but bureaucrats.  The village administrator or city manager and any number of un-elected, virtually invisible, individuals, can ensure that the politicians talk about the things they want the politicians to talk about.  It may be something that neither the politicians themselves or 99% of the community has any interest in, one way or the other, but the bureaucrats can force the conversation, and, as you may very well expect, put their thumbs on the scales so that the politicians come to the decision the bureaucrats wanted them to.

This is all true, but its meant as an illustration only.

In our society, we find that every few weeks, we the people are called to deliberate on yet another new national outrage.  It is like clockwork:  we are minding our own business and BAM, we suddenly have to form an opinion about something. We have to choose a side.  Naturally, we have to broadcast that opinion.   But how did the national outrage du jour get selected?  The ‘item’ was put on the agenda, and the people obediently took up the matter for deliberation.

Now, seasoned politicians understand the influence that unaccountable bureaucrats can have in directing public policy.  But YOU are so daft, it never occurs to you that you are being manipulated.  YOU are so obtuse, you fall for it Every. Single. Time.

Do you even remember what you were angry about three weeks ago?  Given that goldfish have a longer attention span than the modern American, I am reasonably confident you don’t.  Even if you do, you probably don’t remember the one before that.  You might remember what you were angry about a year ago, but that was only because it was an election year.  Even then, I bet you would have trouble recalling the particulars.

Indeed, since we are now knee-deep in the Twitter age, where we cannot think in terms longer than 140 characters, I have probably lost most of my readers:  oh look!  A squirrel!  Coming soon:  a new website where you are only able to express yourselves in monosyllabic grunts.  You watch, it will become the new platform for our high political discourse overnight.  If I still (just barely) have you, here is a 1:15 minute video summarizing a whole lecture I gave on it a couple of years ago:

Now, the embarrassing part is not that you can’t remember what you were angry about, but that you probably don’t even remember being angry in the first place.  By now, any reasonably sensible person would have noticed how we Americans are regularly getting riled up and put at each other’s throats.   Has it not occurred to you that for this to happen on a constant basis, it has to be intentionally contrived?  Someone is setting the agenda.

More accurately, any number of individuals are competing to set the agenda.  Their goal is to make their own agenda item go ‘viral.’  They often succeed.

When these people make things go ‘viral,’ they aren’t just trying to get ad revenue.  They want to achieve something.  I don’t want to get into specific examples here because inevitably some reader is going to want to discuss them, rather than the underlying principle.  It is enough to say that the public sentiment is used as a rationale for some action that these manipulators wanted to achieve, but which otherwise there was no public interest, one way or another.

And you keep falling for it!

I found your picture on the Internet: 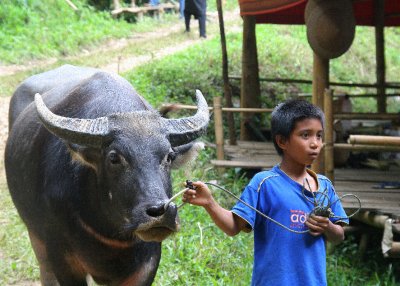 In case you were wondering, you are the one on the left.  And yes, you are so tame, even a child can guide you through the village.

How absurd is it that because Person X, one person out of three hundred million, said comment Y, and suddenly everybody and their mother is shouting at each other, and you right along with them on Facebook?  And just who is Person X?  A veritable nobody.

How silly is it to get all worked up about some event that went down 1,000 miles away from you?  In what sane universe can an event that happened in some far off place, involving people you do not know and will never know, doing things that will never matter to you, become something you need to get angry about?

Surely, these two scenarios alone should remind you of some recent outrages which you blissfully participated in.  I could go on, but again, I don’t want to get into particulars.

Basically, you are a tool.  Someone wants to build something, and they reached into their bag and they pulled out you.  And here is the crazy thing:  as they slam you against your fellow man, you sit back and revel in your own sense of righteousness.  An adult would have figured this out by now.

It might help if you understand that this manipulation is truly intentional and purposeful.  We have been studied.  The technocracy is real, and these elites really believe that they are Pavlov, and you are their dog.   And they don’t believe it for no reason!  They ring the bell, and you start slobbering!

STOP BEING A TOOL!

Here is what you need to do.

The next time you smell a ‘national outrage’ brewing, deliberately refuse to comment on it via Twitter or Facebook, or Grunt.  Just let it go.  In a few days, it will blow over, anyway.  If you find that you cannot resist posting about it, then the odds are very high that you are a tool.  My guess is you don’t want to be a tool.   I have just given you a strategy for becoming a person, not an instrument.  You’re welcome.

Now, this isn’t to say that there aren’t things worthy of comment.  There certainly are!  However, one of the things about ‘national outrages’ is that they often begin before anyone actually has any facts in hand in the first place.  The most important things worthy of comment are complicated things, and in the off chance some event in Wichita actually is worthy of further consideration, its going to take time for the whole story to be told, anyway.  So just wait.

Not to say, either, that I myself haven’t fallen victim to these manipulations.   There are a couple of times where I think I did.  However, as far as I’m concerned, if you’ve waited a good 3-7 days before piling on, that’s not the kind of thing I’m addressing here.

I mentioned above that we have been studied by the technocracy.  If I have pricked your conscience even slightly, I would strongly suggest you begin studying them right back.  I would start with Edward Bernay’s The Engineering of Consent, or even his Propaganda.  Speaking of propaganda, while Ellul’s Technological Society seems to be better known, his book Propaganda shows vividly how mass audiences are studied and deliberately manipulated.  Here is an excerpt on ‘anger’ that I think is about right.  It is long, but worth it.

Let me sum it up:

And that is why people are happy to be tools.  That is why the people who manipulate us via the mass media, etc, know they can continue to get away with it.  We want to be manipulated, because otherwise the meaninglessness of our lives is exposed.

So, BAM BAM BAM — for a hammer, everything is a nail! — there you go to Twitter, Facebook, and Grunt, to spill out your animus, and you think you’ve done your part for society!

Well, there are all sorts of things wrong with this.  The fact that you take offense to this post is proof that you don’t really want to fit the characterizations of this post, which testifies to the fact that, in actuality, you’re not just an animal, subject to the conditioning of the totalitarians.  There is hope for you, yet!  But one of the other reactions to this same phenomena is that sometimes people wake up to the vacuous nature of their own lives and realize that a Tweet is the hollowest measure, so these people channel their anger into actual violence–always in the name of the common good, of course!

Besides growing up, thinking for one’s self, taking the time to actually EDUCATE YOURSELF BEFORE YOU SPEAK, and refraining from being a tool, you should disregard this lie that “all problems are national problems” and turn your efforts to the very places you could actually do something.  That is, your family, or your local community.  Wise up!  You know that ‘national solutions’ are just ways to line the pockets of the elites and further empower them in their position.  They are just using your good intentions!  You know it.

Meaning and purpose really is right around the corner, if you want it.  You may, have to rethink your entire paradigm, however.

I beg you, rethink!

Unless Americans remove themselves from the ‘tool box,’ and soon, I shudder to think we will become.

The ball is in your court, reader.