Guards at the Tomb: Evidence of Jewish Guards at Jesus Tomb

Guards at the Tomb: The Romans and Jews: So (un)Happy Together

Guards at the Tomb: Pilate puts Jesus on Trial, the Jews put Pilate on Trial 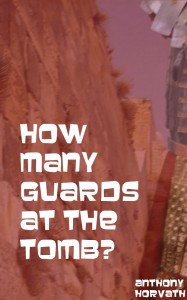 (this is the continuation of a series of essays discussing the number and make-up of the guards at Jesus’ tomb. It can be purchased as an ebook, cover to the right.    Main essay | Previous section | Next section:  The Presence of Jewish Guards at the Tomb )

In light of the foregoing, many skeptics have pointed to the nearly docile Pontius Pilate of the Gospel accounts as proof positive that they cannot possibly reflect real history.  The character and demeanor of the Pilate that Jesus met is nothing like the character and demeanor of the Pilate of Philo and Josephus.  The possibility that Pilate’s radical transformation–for a brief few days–is a testament to the over-awing impression that meeting Jesus–the creator of both the immovable wall and the unstoppable force–has on someone doesn’t cross their minds.

Which version you prefer seems to depend on what degree you’re willing to take the documents on their face–all of them, Philo, Josephus, and the Gospels–or rather assume that the Gospels are guilty until proven innocent (which they cannot believe can even conceivably be done).  Nonetheless, there may be some threads in the Gospel narratives that might take on new significance given the brief history we’ve sketched of Pontius Pilate using extra-biblical sources… and in doing so, add credibility to the Gospel accounts.  Perhaps it is the same man being described, after all.

At any rate, with this background in mind, can you see now why it would have been extraordinarily unlikely that the Jews would not have wanted to have some of their own men present at the tomb?  On the one hand, they might be saying, “If this man is reported risen from the dead, this will be worse than it already is!” but on the other hand they would be saying, “I wouldn’t put it past Pilate to try something to make our lives miserable!”

In the Gospel accounts, this tension between the two parties is clear, even in the sections where Pilate is putting Jesus on trial.

Indeed, in the Gospel of Luke, where Pilate will later come off as timid as in the other Gospels, we read the account of Pilate having the blood of Galileans mixed with their own sacrifices, and the question put to Jesus whether or not they had sinned enough to deserve such treatment (Luke 13:1).  Pilate is a horrible, bloodthirsty guy, who is stubborn to boot.  But it is the Jews and their leadership he detests the most.  He would love to let Jesus go free, even if only to spite the men he hates.  Actually meeting Jesus, though, seems to compel him to look beyond his own petulance.

In Matthew 27:18, the text indicates that Pilate knew exactly what the Jewish leader’s real motive was:  envy.  Pilate tries to evade the issue by sending Jesus to Herod, but this does not work.  Then Pilate attempts a ploy whereby Barabbas is set against Jesus by comparison;  presumably, Pilate expects the Jews to be very familiar with Barabbas.  Perhaps Barabbas is in prison to begin with because the Jews had requested it.  Pilate fails in this ploy, too.  Finally, Pilate has Jesus flogged, hoping that with blood now being shed, the Jews will relent (John 19:1-5).

Pilate is a stubborn man who, as we’ve already seen, is perfectly willing to play things out to the end in order to get what he wants.  But the immovable wall is about to meet the unstoppable force one more time.

Having fully established in his own mind that he was going to do everything in his power to have Jesus released, the Jews now spring their trap:

“If you release this man, you are not Caesar’s friend.  Everyone who makes himself a king opposes Caesar.” (John 19:12)

We will now recall how the Jews have already previously threatened to tattle on Pilate, and Philo’s account of how Pilate’s attempt to circumvent this by sending his own letter to his superiors ended up with him in hot water, and having to remove the shields from Jerusalem.  The Samaritans actually will succeed in having Pilate removed by sending complaints to Pilate’s superior.  This is no idle threat the Jews are making, and the possible consequences to him (ie, exile or death) are not imagined.  Pilate knows all this.  Pilate recognizes precisely what the Jews mean by their suggestion that he would not be “Caesar’s friend.”

But the really amazing statement comes from a series of subtexts set in motion by the intimation of ‘someone making themselves a king.’  Pilate is now perhaps at his wits end, but desires to tweak the Jews.  He brings Jesus to the Stone Pavement for all to see, and declares, “Behold your King!”  To this, the Jews scream that Jesus is to be crucified.  Pilate says, “Shall I crucify your king?”  To this, the Jews make this truly startling retort:  “We have no king but Caesar!”

It is these people who now say that they have no king but Caesar.

The unstoppable force wins again, because there truly is nothing that will stop them from their goal of having Jesus killed.  Jesus could very well have been God and their rightful king, but the Jewish leaders in the final analysis cared little about that.  It was their own power they wished to secure, and their own skins they wished to save.

The unstoppable force may have gained its primary objective, but the unmovable wall is not finished.  He decrees that a sign be fixed to Jesus’ cross declaring Jesus to be the king of the Jews in three languages.  The Jews don’t like to be needled:  they ask for the inscription to be re-written for ‘accuracy.’  Pilate is pleased they are annoyed.  He retorts:  “What I have written I have written.”  It’s a small victory, but Pilate is the sort of man who will take any victory rather than no victories.

When Jesus dies and Joseph of Arimathea comes to ask for Jesus’ body, Pilate is pleased to grant his request.  When the Jews heard about it, they could not have been very happy.  Their ‘request’ is laced again with the subtext of contempt that Pilate and the Jews shared for each other:  “lest his disciples go and steal him away and tell the people, ‘He has risen from the dead,’ and the last fraud will be worse than the first.”  And the first fraud was of Jesus’ claim to be king–a proposition that already drove the Jews to threaten to take the matter to Caesar.  The unstoppable force wins again;  it would prove to be its last victory.

The Gospel accounts, far from showing themselves contradictory to history in regards to the real nature and character of Pilate and his relationship to the Jews, are actually extraordinarily consistent with those things.  Pilate and the Jews are at each other’s throats throughout the exchanges, with each trying to get under the other’s skin.  With this as the context, can we imagine the Jews would want to have the Roman guards at the tomb without having their own officers present?  It seems unfathomable.

The Jews seem to end with the upper hand, but it backfires miserably.  By ensuring that Roman guards are present at the tomb in sizable numbers, when the body of Jesus does actually go missing, their explanation that the disciples stole the body seems weak and pathetic.  After all, if we can ascertain today how dangerous it was for a Roman guard to fall asleep at their post, how common and well known was it at that time, for people who actually lived under the Roman thumb?

This alone is enough to explain why the other account, that Jesus had actually rose from the dead, spread like wildfire, and the idea that the disciples stole the body became a mere footnote to the story.

However, the presence of Jewish guards at the scene would have also eliminated another possibility:  that Pilate had been up to shenanigans.